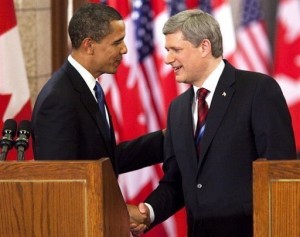 Please take a lesson from your Canadian counterpart, Prime Minister Stephen Harper, on how to promote women’s health across the globe in a manner that doesn’t compromise the consciences of the majority of your nation’s citizens.

A lot of American citizens

The G8 is launching a campaign in the coming months aimed at improving the health of mothers and their children in the world’s poorer nations through a variety of methods. One of the methods on the table for the G8 is (unfortunately) to provide abortion funding in poorer nations. Other methods include training health-care workers, treating and preventing diseases such as malaria and pneumonia, screening and treating sexually transmitted diseases, immunization, clean water, sanitation and family planning. Canada has decided that they will not be contributing to any G8 abortion initiatives. The United States however, in keeping with President Obama’s decision to repeal the Mexico City Policy, sees no problem in providing abortion services with Federal money in the G8 plan.

Prime Minister Harper, realizing that only a limited amount of taxpayer funds are available from his nation to help the G8 initiative, has decided that such funds should be used for programs that aren’t considered to be the killing of human life by a very large portion of Canadian taxpayers (75% in a recent poll) but rather directed to effective, NON-DIVISIVE, health initiatives like disease prevention, disease treatment, and sanitation. It seems quite logical that if expectant mothers can depend on better water and more efficient disease prevention they might also be more capable to raise healthy children instead of having to see abortion as the only viable option.

A couple of quotes from Prime Minister Harper:

“We want to make sure our funds are used to save the lives of women and children and are used on the many, many things that are available to us that frankly do not divide the Canadian population.”

“Frankly there is not enough money to do all the things we want to do, even in those areas. We will concentrate our efforts on areas where Canadians are united and want to see progress.”

Well said Prime Minister. Thanks for incorporating some true wisdom into your policy making. The American people are kind of jealous of our Canadian neighbors in this respect.