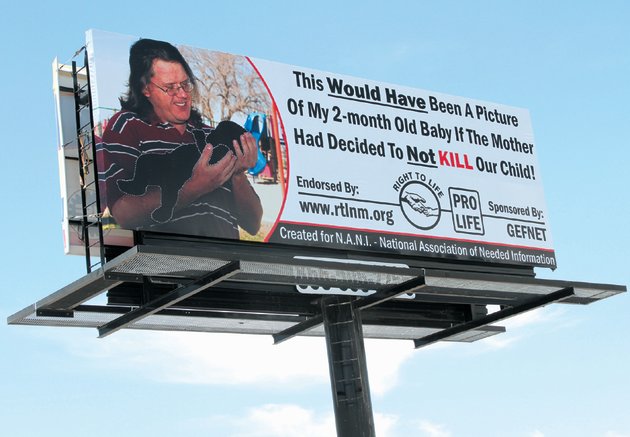 Abortion is often viewed as a woman’s issue. The role of the father and other family members is for the most part ignored. One man is fighting that ignorance.

In New Mexico, Yahoo News reports that Greg Fultz created a billboard advertisement which shows him holding the outline of an infant, accompanied by the following text: “This Would Have Been A Picture Of My 2-Month Old Baby If the Mother Had Not Decided to KILL Our Child!”

As is often the case, Fultz’s ex-girlfriend elected not to inform him of her pregnancy.  While this event has set off a debate on free speech versus privacy, Fultz’s grief is clear.  His reaction whether one agrees with his methods or not, obviously demonstrates that abortion is not just a woman’s issue.

While Fultz’s reaction is very public, most relatives and friends of post-abortive women and men  react more privately. Their thoughts and feelings cover an entire spectrum, from shock and sadness to anger directed at their selves. While only the mother suffers the physical effects of the abortion, it is essential to consider abortion from the perspective of the father, and even other family members.

Women are the ones to experience pregnancy, but we can’t forget about the common ground of men and women: our humanity.  Our shared humanity is the basis for the pro-life movement.  Women and men alike should be outraged that over 4,000 human beings are being slaughtered every day and be driven to join the fight for Life.