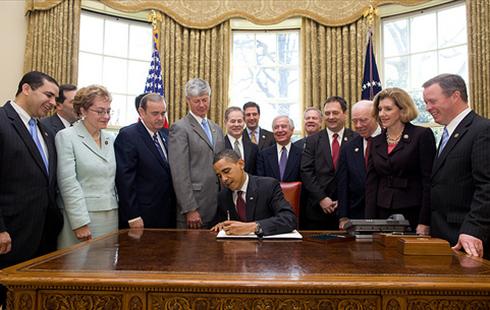 In this week’s issue of The Weekly Standard, John McCormack discusses the future of pro-life Democrats. McCormack, who has been covering the role of pro-life Democrats (and pro-life Republicans) in the health care debate since it first began, provides great insight into the history of these elusive politicians, and what lies ahead.

Stupak may not be dishonest, but he’s certainly mistaken about the executive order that secured his vote, and the votes of other self-proclaimed pro-life Democrats, for Obamacare. Doesn’t the executive order simply affirm the Senate bill’s main abortion-funding provision that Ben Nelson signed off on—a provision that Stupak called “unacceptable” back in December? “I didn’t like the Nelson language on December 24, and up through that time,” Stupak replies. “Then there were changes in it, in the final bill. They cleaned it up quite a bit. There were changes made.” In fact, the abortion language passed by the Senate on December 24 is identical to the language signed into law by President Obama on March 23.

“I didn’t think we were going to get into the nitty gritty,” Stupak says after I ask him about the section of the executive order that says subsidized plans may cover elective abortions so long as federal subsidies are “segregated” from private dollars—the main funding mechanism of abortion in the bill and something Stupak had long rejected as a meaningless bookkeeping scheme. “I’m happy to call back if you want to get into the nitty gritty,” he says, “but in all honesty I don’t have [the executive order] sitting here in front of me.” Stupak said that on June 15. He never called back.

The health care vote confirmed that when a pro-life Democrat’s principles collide with his loyalty to the broader Democratic agenda, it’s the pro-life principles that give way. This pattern goes back all the way to Roe v. Wade. It happened long ago with the likes of Jesse Jackson and Richard Gephardt and Al Gore. Ultra-liberal Dennis Kucinich of Ohio—long a pro-lifer—tossed that position overboard the instant he launched his vanity presidential campaign in 2004. Harry Reid of Nevada sold out what remained of his pro-life principles in exchange for becoming the Senate Democratic leader in 2005. The Senate’s health care vote in December claimed the credibility of the two remaining pro-life Democrats in that chamber: Bob Casey of Pennsylvania, who announced he’d rather pass a national health care bill that funds abortions than pass no bill at all, and Ben Nelson of Nebraska, who held out for a bit of extra federal cash for Nebraska known as the Cornhusker Kickback.

But Stupak was supposed to be different. He held out in spite of intense pressure from party leadership and activists for months. “I’ve had so many death threats, I don’t know if most of them were for or against health care, before or after [the vote],” he says. As Stupak told The Weekly Standard two weeks before the health care vote in March: “If I didn’t” cave in before, “why would I do it now after all the crap I’ve been through?”

Good question. We still don’t fully know the answer. But the reason doesn’t matter to pro-life groups. The lesson they took away from the health care vote is that there needs to be a day of reckoning for the Stupak Democrats, who cannot claim to be pro-life after voting for taxpayer-funding of abortion. So far, the pro-life Susan B. Anthony List has had some success targeting these members through its $1 million Votes Have Consequences campaign.