The Votes Have Consequences Bus Tour is coming to Pennsylvania!

You can thank Rep. Kathy Dahlkemper, a Democratic Congresswoman selling out the 3rd District for making it all possible.

In 2008, Kathy Dahlkemper campaigned for Congress as a pro-lifer and won. But when push came to shove, Dahlkemper caved to Pelosi and Obama and is personally responsible for ushering in the biggest expansion of abortion since Roe v. Wade by supporting ObamaCare.

Kathy Dahlkemper put politics above principle, sold out Pennslyvania values, and now it’s time for her to pay.

The Votes Have Consequences Bus Tour will roll through her district this upcoming Monday, August 16th. Here’s a quick rundown of the press conferences and speakers. Local activists are invited to attend and bring homemade signs.

8:45 AM: Erie at the Erie Intermodal Transportation Center, speakers include Congresswoman Marilyn Musgrave, Tim Broderick of People for Life, and Abigayle A. Koller of Rachel’s Vineyard.

10:30 AM: Meadville at the Bicenntential Park. Speakers include Congresswoman Marilyn Musgrave and Diane Gramley, president of the American Family Association of Pennsylvania

If you’re in the area, make sure to bring your friends, co-workers, family, etc. to any of the stops.

We already know that Dahlkemper is a tad bit worried about the bus roaring through her district considering the current splash on the front-page of her Congressional website: 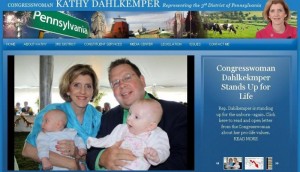 Considering that Dahlkemper’s name is spelled wrong — Dahlkekmper — and the text contains grammatical errors, I’d say her efforts to spin are off to a bad start.

Check out our PA-03 polling results here — 3 out of 4 voters in Pennsylvania’s 3rd District oppose taxpayer funding of abortion, and oppose the overall health care bill by a margin of 51% to 39%. Monday should be fun.