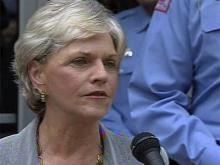 Recently the first majority-Republican North Carolina General Assembly since the Reconstruction Era passed an impressive string of new pro-life laws. These laws include language substantially defunding Planned Parenthood in the State budget, as well as the Woman’s Right to Know Act, which would require that an ultrasound be performed on women seeking abortions and require a 24-hour waiting period for women seeking abortions. These common-sense, life-saving measures have been proven to reduce abortion rates in states where they have been enacted.

Unfortunately, North Carolina’s Democrat Gov. Beverly Perdue is an avowed supporter of abortion, and has vetoed each of the pro-life bills passed by the General Assembly. Fortunately, the budget bill defunding Planned Parenthood was overridden by the legislature on 15 June, thus preventing $434,000 worth of North Carolina taxpayer dollars from supporting the abortion giant. Now the NC General Assembly faces another challenge in its efforts to protect unborn life.

Unfortunately, the votes to pass the Woman’s Right to Know Act in the House and Senate fell one vote short of the override threshold in each chamber. North Carolina pro-lifers are working feverishly to convince the two members necessary to switch their votes so that these awesome bills can be enacted.

The Most Rev. Peter J. Jugis, the Roman Catholic Bishop of Charlotte, NC, penned an Op-Ed in the Charlotte Observer newspaper on Thursday pledging himself this work. “In the coming weeks, my prayers and efforts will be focused on convincing at least two more legislators that the Woman’s Right to Know Act respects the dignity of a woman with an unplanned pregnancy as she considers the fate of the innocent human life she carries in her womb.”

We salute Bishop Jugis and the North Carolina General Assembly for acknowledging the importance of protecting innocent unborn life in their state, and we urge all our North Carolina supporters to contact their State Representative and State Senator and tell them to VOTE YES on overriding Gov. Perdue’s veto of the Woman’s Right to Know Act.

Switchboard of the North Carolina House of Representatives: 919-733-7928