Thank you to the many that sacrificed their time and schedules to be present at the powerful gathering this morning in Germantown, MD – and for all who were unable to attend, thank you for your prayers!

Late-term abortionist Leroy Carhart pulled into his clinic early this morning, and was soon followed by more than 1600 faithful pro-lifers to stand up for the unborn and be a witness to the hundreds of babies killed in the past year at the late-term abortion facility, Germantown Reproductive Health Services in Germantown, MD.   Many young children, elementary to college age, young professionals, parents, grandparents and families, pastors, priests and seminarians poured into the grassy patch and sidewalks along the office park where the clinic is located in a peaceful and prayerful protest in the name of the dignity and value of life.

Every time I go to the abortion site I am struck with the sadness and gravity of the abortion issue.  Today in particular, I was reminded of just how many lives have been killed in this short year.  Look at the picture of the crosses, it captures just a fraction of the 720 crosses that were placed in the ground today in remembrance of the lives lost, not fighting for our country, but rather innocently slaughtered at the hands of Carhart this past year.  Reminding me of the attacks from September 11, 2001 the crosses and memorials are a harsh yet realistic reminder of the lives unjustly lost – why were they killed and I saved?  I thought about that same gruesome reality and the deaths that occur each week not on a battle field or in a terrorist attack—but in a “doctor’s office,” at the hands of Leroy Carhart in Germantown.- Why I am here and those innocent children killed before even having a voice to speak for themselves?  The answer to these questions only leave me with a passion to fight so that others may have the same basics rights as I do being born in the USA – LIFE, liberty and happiness.

It was a profound testimony of unity seeing many people come from the D.C., Maryland, and Virginia area to protest abortion – all were united to pray for an end to abortion and be a witness for the unborn – both the young and old alike.  The large number of youth present was very inspiring: many young adults took off work in the morning to stand for the unborn and some schools even allowed their students to take the morning off to participate.  Multiple schools were present both to educate students about the reality of abortion and teach them that they must be activists and work hard to end the evil of abortion.

Chuck Donovan, the President of the Susan B. Anthony List’s Education Fund was on hand to encourage the crowds along with other motivational and informative speakers to stand for Life.  Through song, prayer and words of encouragement the crowds were enthused and motivated to come back every week to protest what happens behind the walls of the Germantown late-term abortion clinic. 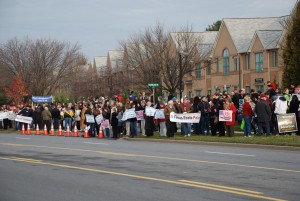 Although the fruits from the day made not be made publicly known in the near future, the seeds planted and the witness to hundreds of drivers and local townspeople will one day bear fruit in some shape or form.  The right and fight for LIFE continues and we must be courageous, persistent and grateful for our own lives, and willing to fight to save the lives of others.