We know from the work of Silent No More Awareness, Rachel’s Vineyard, and other post-abortion healing ministries that many women come to regret their decision after an abortion. They feel incredible remorse for their decision, too late to change. However a new abortion pill reversal kit makes it possible for women to reverse their abortion; giving them resources to ultimately chose life.

The reversal kit allows women to reverse their abortion within the first 72 hours of taking the first of two abortion pills. In a recent interview with Fox 46 in Charlotte, North Carolina, Dr. Matt Harrison, who pioneered the reversal process, says the kit is 60% effective. 137 babies and their moms have been given a second chance at life thanks to the reversal process!

More than 300 doctors in America are utilizing this reversal kit to save lives.

The incredibly pro-life Fox 46 feature piece shares the Autumn Barnes’s story. The young mother immediately regret her decision after taking the first of two abortion pills while she was eight weeks pregnant with her son. Autumn had an unexpected pregnancy and was worried about paying bills while already taking care of one child at home. Autumn explains that as soon as she got into her car after taking the first abortion pill, she realized that she made the wrong choice; that the innocent baby forming in her womb at eight weeks was exactly like the same child she had waiting at home for her.

Watch the incredible story and then head to Facebook to thank the reporter, Bill Melugin, for sharing such a life-giving (and live-saving) story! 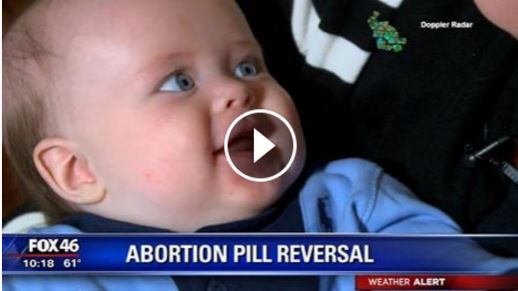 For more information on how the Abortion Reversal Pill Kit is helping save the lives of children and mothers, read a blog post from the Charlotte Lozier Institute.