Fun fact for all you pro-lifers who have been following the Olympics in Vancouver this week. The Canadian women’s curling team is favored to win and has more than that to be excited about! 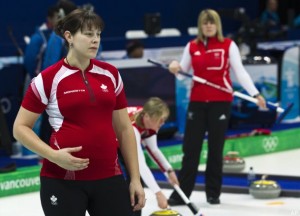 “As with all curling teams, Team Canada features five members. Well, six, if you really want to get technical with it,” reports Chris Chase of Yahoo Sports News:

Alternate Kristie Moore, 30, is 5½ months pregnant, making her just the third athlete known to be with child during Olympic competition. Ninety years ago, Swedish figure skater Magda Julin won a gold medal at the Antwerp Games while in her first trimester and Germany’s Diana Sartor took fourth in the skeleton in 2006.

Though she is showing (as evidenced in the picture above), Moore says that her pregnancy has not affected her ability to deliver rocks … yet. “[In] the eighth month or so, that might be an issue,” she said.

Chase reports that Kristie’s teammates were more than supportive when they found out she was pregnant. Though she may not have to play because she is an alternate, Kristie will still get a medal if the team wins.