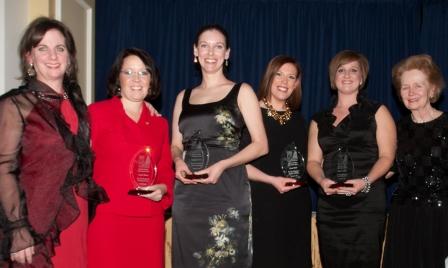 In the Pro-Life movement, there is nothing more encouraging then seeing young people continually stepping forward into the front lines in the battle for Life. However much the opposing side would like to discourage us, it is increasingly obvious that the young people in our nation are pro-life. It is the energy and the enthusiasm of the young people that propels and energizes the pro-life movement. It is their loving witness to the truth that will ultimately help us eradicate the evil of abortion.

Every year the Susan B. Anthony List recognizes and honors several outstanding young pro-life women with the presentation of its Young Leader Award. The awards are presented to young women of conscience and action who are leading the pro-life cause in various capacities throughout the country. These young women are saving lives by being involved in their communities, in crisis pregnancy centers, in their local and state governments, and in the media.

Past winners have included Chelsea Rearick of Pennsylvania, Executive Director of Life Choices. Since joining the clinic in 2009, Chelsea has successfully undertaken a ground-breaking fundraising drive to expand the clinic to include free ultrasounds for abortion-minded women. Another winner of the Young Leader award is State Representative Rachel Burgin (FL-56) who, at 26, was the youngest Republican woman ever elected to the Florida State House. Always active in the pro-life movement, as a representative, Rachel has been involved in crafting a pro-life legislative agenda for Florida. During her first elected session Rachel proposed House Bill 943 with the intention of allowing a woman the right to view an ultrasound before an abortion, believing that women should be fully informed in advance of a life-altering decision.

Please, if you know a young woman (under the age of 30) who is leading the fight for Life, please nominate her today! The SBA List would love to recognize her for contributions to the pro-life cause at our 5th Annual Gala. As the Susan B. Anthony List celebrates its 20th Anniversary, we would love to celebrate and encourage young, bold pro-life woman to take action! Nominations for the 2012 Awards are due December 16 2011!