A new abortion law went into effect in Spain this Monday, July 5, which raises abortion to the status of a civil right. Abortion was first legalized in Spain in 1985, but was permissible only under three circumstances:

In February of this year, the PSOE: Partido Socialista Obrero Español (Spanish Socialist Workers’ Party) – Spain’s ruling party – succeeded in getting its new abortion law approved by Parliament. It was subsequently signed by both José Luis Rodríguez Zapatero (Spanish Prime Minister and member of the PSOE) and Juan Carlos I (King of Spain). The new law codifies that women have the “right” to obtain abortions up to the 14th week of gestation, no questions asked. The debate surrounding the law had already struck a nerve with the Spanish people and spurred them into action even before anything had been approved. Grassroots pro-life organizations such as Hazte Oír (http://www.hazteoir.org/) and Derecho a Vivir (http://derechoavivir.org/) took Zapatero and the PSOE to task immediately, and organized a series of very successful demonstrations and ad campaigns to show the strength of the opposition to the liberalization of Spain’s abortion laws. The most famous of these was the demonstration on October 17, 2009 in Madrid, which brought approximately 1.5 million pro-life activists to the Spanish capital (http://www.lifesitenews.com/ldn/2009/oct/09101908.html).

Despite the massive show of public disapproval, the bill narrowly passed through Parliament, was signed and officially became law on Monday. It was immediately met with political and legal resistance; the governors of the Spanish regions of Murcia and Navarre said that they would not enforce the law in their regions until the Constitutional Tribunal (Spain’s highest court) declares the law to be constitutional ( http://www.elpais.com/articulo/sociedad/ley/aborto/nace/resistencia/elpe…). (Spain’s conservative party, the PP: Partido Popular [People’s Party]  had already filed a suit against the law.) Since the initial resistance, however, Ramón Luis Valcárcel Siso – Governor of Murcia – has recanted his opposition after receiving a letter from the Spanish Ministry of Health, which urged him to “take all appropriate measures to put the law into effect immediately.”  Valcárcel justified his decision by saying that he would support the new law because of “legal imperative, not because we agree with it, since its effects are irreversible” (http://www.elpais.com/articulo/sociedad/Murcia/recula/dice/ahora/acatara…). Other regions, including Madrid and Galicia, have also expressed a more lukewarm disapproval of the new law.

While the battle over the new law continues, the Spanish people will continue to encounter a new urgency to reclaim their heritage and culture from a nihilistic government that seeks to destroy the foundations of that people’s society. As one young pro-life activist from Valencia unhesitatingly affirmed, “Abortion is murder.” 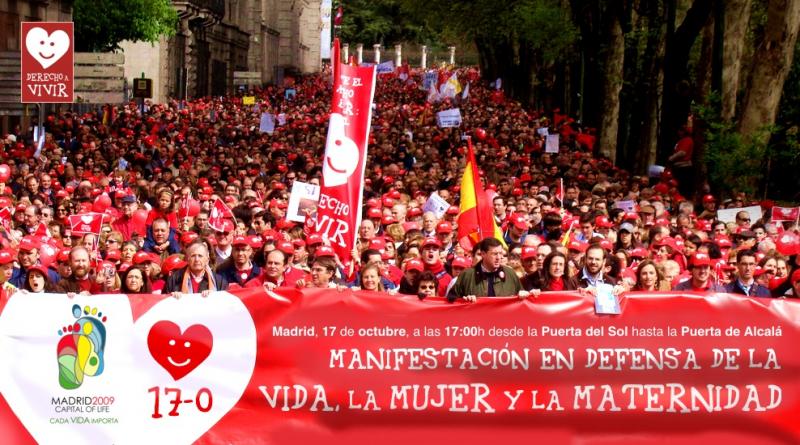