This op-ed ran on the “On Faith” blog at The Washington Post today. 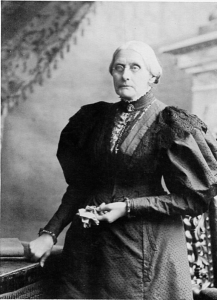 Two Susan B. Anthony scholars, Ann Gordon and Lynn Sherr, think they’ve struck at the heart of the pro-life argument: the Susan B. Anthony List’s ignorance of who its namesake actually was. Citing a lack of documentation of the suffragists’ stance on abortion, the authors concluded that Anthony was, “instead,” pro-women’s rights – in the Hillary Clinton-era sense of the term – or, at best, that abortion was nowhere on her radar.

The argument is unfounded on many levels, but foremost, on the credibility issue.

Susan B. Anthony was passionate and logical in her arguments against abortion. The Revolution was her brainchild, co-founded with Elizabeth Cady Stanton as a weekly women’s rights newspaper that acted as the official voice of the National Woman Suffrage Association and in which appeared many of her writings alongside those of her like-minded colleagues. Most logical people would agree, then, that writings signed by “A” in a paper that Anthony funded and published were a reflection of her own opinions.

In one house editorial, signed “A”, she wrote: “Guilty? Yes. No matter what the motive, love of ease, or a desire to save from suffering the unborn innocent, the woman is awfully guilty who commits the deed. It will burden her conscience in life, it will burden her soul in death; but oh, thrice guilty is he who… drove her to the desperation which impelled her to the crime!” [The Revolution, 4(1):4 July 8, 1869]

Further, as one becomes familiar with Anthony’s compatriots and their thoughts on the issue, it is clear and consistent that these early women leaders did not believe abortion was a good thing for women.
Elizabeth Cady Stanton lamented, “When we consider that women are treated as property, it is degrading to women that we should treat our children as property to be disposed of as we see fit.” [Letter to Julia Ward Howe, October 16, 1873]

In Anthony’s The Revolution, Stanton referred to abortion as “infanticide.” [1(5):1, February 5, 1868]
Victoria Woodhull, the first female presidential candidate, told a newspaper of the day that “Every woman knows that if she were free, she would never bear an unwished-for child, nor think of murdering one before its birth.” [Wheeling, West Virginia Evening Standard, November 17, 1875]

Dr. Elizabeth Blackwell, the first female physician, recorded in her diary her thoughts about Madame Restell, an early New York abortionist. She said, “The gross perversion and destruction of motherhood by the abortionist filled me with indignation, and awakened active antagonism. That the honorable term ‘female physician’ should be exclusively applied to those women who carried on this shocking trade seemed to me a horror. It was an utter degradation of what might and should become a noble position for women.” [1845]

All of this went on-record at a time when abortion wasn’t even a hot political issue of the day. Even those doctors practicing abortion had to disguise what they advertised as a service to restore a woman’s regular menstrual cycle. Abortion simply wasn’t up for debate at a time when society itself was firmly against the practice.

So, while the Life cause isn’t the issue that earned Susan B. Anthony her stripes in American history books, historians would be wrong to conclude that Anthony was agnostic on the issue of abortion.
Anthony understood that fighting for women included the rights of her unborn child.

Over time, “feminism” became the label adopted by activists preaching that women’s rights and abortion rights were somehow one and the same. For years, too many feminists have told women facing a crisis pregnancy the only way to continue a successful life is to have an abortion.

But recently, there has been a shift back to the traditional roots of a Susan B. Anthony feminism that empowers women through their strength to give life even in the most difficult and unexpected circumstances. In recent Gallup polling, more and more women self-label themselves “pro-life” over “pro-choice.” More and more pro-life women run for public office.

Many conservative commentators have hailed this “new feminism,” the rising majority of women who reject the radical feminism of the 1960’s and use traditionally “feminist” issues, such as abortion, to herald in a new era of women’s rights. This new wave of excitement is poised to elect true pro-life women to Congress, and the Susan B. Anthony List is looking forward to November to usher in these leaders who understand that the rights of one are not built on the broken backs of another.

And, in case there’s still lingering doubt about where Susan B. Anthony’s convictions lie, her words to Frances Willard in 1889 speak for themselves: “Sweeter even than to have had the joy of children of my own has it been for me to help bring about a better state of things for mothers generally, so that their unborn little ones could not be willed away from them.”