Yesterday, celebrated writer and poet Maya Angelou passed away, leaving a rich literary legacy behind… and a son, Guy Johnson.

While you may have heard of Guy, an accomplished author himself, you may not know Maya was a single teen parent, and could have had an abortion. Instead, Maya chose life for Guy, and years later would tell Oprah, “My greatest blessing has been the birth of my son.”

Here is the story of Maya and Guy in her own words, originally published in Family Circle Magazine. 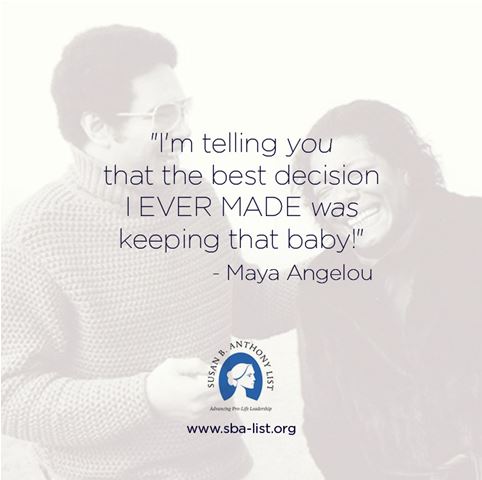 “When I was 16, a boy in high school evinced interest in me, so I had sex with him — just once. And after I came out of that room, I thought, Is that all there is to it? My goodness, I’ll never do that again! Then, when I found out I was pregnant, I went to the boy and asked him for help, but he said it wasn’t his baby and he didn’t want any part of it.

I was scared to pieces. Back then, if you had money, there were some girls who got abortions, but I couldn’t deal with that idea. Oh, no. No. I knew there was somebody inside me. So I decided to keep the baby.

My older brother, Bailey, my confidant, told me not to tell my mother or she’d take me out of school. So I hid it the whole time with big blouses! Finally, three weeks before I was due, I left a note on my stepfather’s pillow telling him I was pregnant. He told my mother, and when she came home, she calmly asked me to run her bath.

I’ll never forget what she said: “Now tell me this — do you love the boy?” I said no. “Does he love you?” I said no. “Then there’s no point in ruining three lives. We are going to have our baby!”

What a knockout she was as a mother of teens. Very loving. Very accepting. Not one minute of recrimination. And I never felt any shame.

I’m telling you that the best decision I ever made was keeping that baby! Yes, absolutely. Guy was a delight from the start — so good, so bright, and I can’t imagine my life without him.

At 17 I got a job as a cook and later as a nightclub waitress. I found a room with cooking privileges, because I was a woman with a baby and needed my own place. My mother, who had a 14-room house, looked at me as if I was crazy! She said, “Remember this: You can always come home.” She kept that door open. And every time life kicked me in the belly, I would go home for a few weeks.

I struggled, sure. We lived hand-to-mouth, but it was really heart-to-hand. Guy had love and laughter and a lot of good reading and poetry as a child. Having my son brought out the best in me and enlarged my life. Whatever he missed, he himself is a great father today. He was once asked what it was like growing up in Maya Angelou’s shadow, and he said, “I always thought I was in her light.”

Years later, when I was married, I wanted to have more children, but I couldn’t conceive. Isn’t it wonderful that I had a child at 16? Praise God!”