“The so-called accommodations recently announced to the HHS Mandate do nothing to address the concerns of non-religious entities and employers who do not wish to be complicit in the destruction of life through abortion-inducing drugs. Congress must act immediately to pass the Health Care Conscience Rights Act and ensure the conscience rights of all Americans are protected.”

Rep. Black’s legislation shows the growing momentum to stand up for conscience.To date, SBA List activists have sent more than 60,700 messages to Congress demanding legislative action to protect the freedom of conscience and religious liberty against the HHS Mandate.

Additionally, more than 50 national and statewide groups have joined the recently launched Call2Conscience.com coalition to mobilize grassroots in response to the assault on conscience and religious liberty.  Hundreds of thousands of Americans were mobilized last week to urge Congress to include language to defend conscience and religious liberty in any must-pass funding legislation.

Rep. Diane Black, along with the bill’s other two lead sponsors, Rep. Jeff Fortenberry (R-NE) and Rep. John Fleming (R-LA), led a press conference today highlighting the victims of discrimination against pro-life health care workers and victims of the HHS mandate. Kathy DeCarlo, a nurse at a New York City hospital, described how she was forced, under threat of losing her job and nursing license, to assist in a 22 week abortion, claiming she felt “violated all over again” when the courts told her she had no legal recourse to sue. Other victims of conscience violations spoke, putting a human face on the tragedy and destruction of the HHS mandate and discrimination against pro-life convictions. 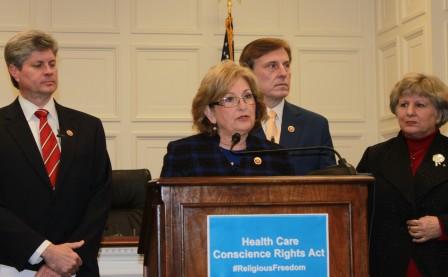