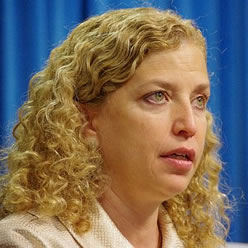 Responding to the news this week that the House Subcommittee of Oversight and Investigations would be investigating Abortion Mega-Provider Planned Parenthood, Rep. Debbie Wasserman-Schultz (D-FL)- the chair of the Democratic Nation Committee, bitterly attacked the investigation and accused Republicans of launching a partisan attack against the organization.

“The Scope and nature of this investigation is unprecedented, invasive, and the big brother equivalent of a modern day denial-of-service attack,” said Wasserman-Schultz. “Republicans having failed to strip funds for Planned Parenthood’s essential health-care services through the legislative process, now appear to want to bury Planned Parenthood under a broad and unwarranted political witch hunt.”

These kinds of attacks following the announcements of the investigation have been popular. Senator Richard Blumenthal (D-CT) called the investigation “an abusive witch hunt by Republicans” and said that it was “harassment of a trusted healthcare provider for millions of women and families in Connecticut and across the country.”

These knee-jerk defenses of Planned Parenthood and willingness to attack anyone who would even consider questioning them casts a serious shadow across Planned Parenthood’s already questionable credibility. When an organization has shown willingness (on tape) to aid alleged sex traffickers and failed to report the abuse of young girls, it seems slightly outrageous to call an investigation of that organization a “witch hunt.” It leads one to ask what would Rep. Wasserman-Schultz or Sen. Blumenthal consider worthy of inquiry if the exploitation of women and young girls is so trivial to them?

The evidence thus far against Planned Parenthood does not seem spectral or flimsy as to be called a witch hunt. These are serious offenses that deserve serious action. Thankfully some members of Congress, like Congressman Cliff Stearns, are not so flippant when it comes to protecting women. Let us just hope it is from ignorance that Wasserman-Schultz and Blumenthal try to protect Planned Parenthood and they are not just afraid of what will be found when investigators start searching through Planned Parenthood’s closets.