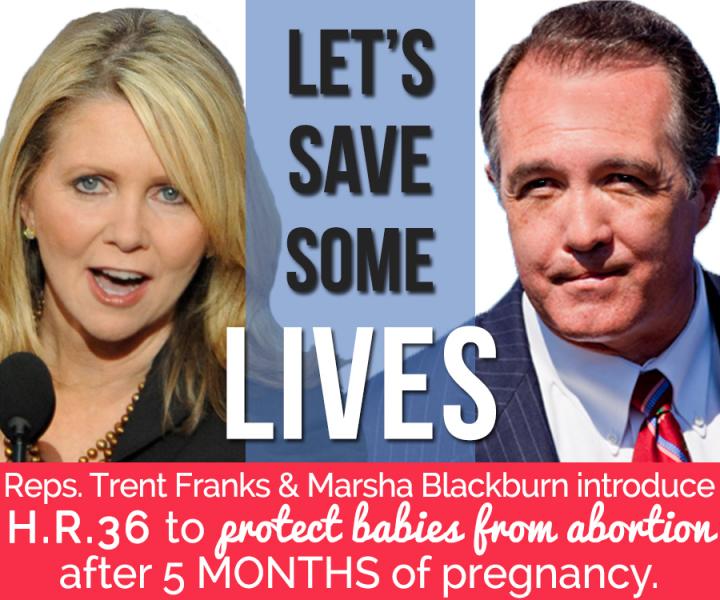 My message to the new Congress is clear:

It’s time to get to work to pass laws that save the lives of unborn children and protect vulnerable women.

And I’m happy to report that things are off to a GREAT start.

Today, on the very first day of the 114th Congress, the Pain-Capable Unborn Child Protection Act (H.R. 36) was introduced in the U.S. House of Representatives.

The bill is being sponsored by two of my closest friends in the House, Rep. Trent Franks (R-AZ) and Rep. Marsha Blackburn (R-TN). It seeks to protect precious unborn children after 20 weeks, or 5 months of pregnancy, based on their ability to feel excruciating pain. Remember, if this bill passes the House, the new pro-life Senate Majority Leader Mitch McConnell has promised to bring it up for a Senate vote, unlike his predecessor Harry Reid, who blocked it.

I’ve been working closely with Congressmen Franks and Blackburn on advancing this bill in the new Congress, and I’ve told them both repeatedly that SBA List members across America have their backs.

>>> So the very first thing I need you to do is to instantly email your Representative and ask them to co-sponsor the Pain-Capable Unborn Child Protection Act.

You see, your SBA List does not exist solely to elect pro-life politicians to office. That’s only the beginning.

We work to capitalize on our election victories by translating them into legislative victories. Put simply, we work for – and demand – a “return on investment.” When we help elect pro-lifers to Congress we expect them to advance legislation to save babies and their moms from abortion.

Because of the hard work of SBA List – only made possible by your support – the new Congress sworn in today has an even bigger pro-life majority in the House and enjoys pro-life leadership in the Senate for the first time in 8 years.

While a pro-abortion radical – President Obama – occupies the White House, we still have an opportunity to make pro-life gains this Congress, especially as we work to elect a pro-life president in 2016.

Our top priorities for this Congress include:

This fight begins today with the new Congress convening, and with the speedy introduction of the Pain-Capable Unborn Child Protection Act.

>>> So please, email your Representative right now and urge them to co-sponsor the Pain-Capable Unborn Child Protection Act.

nd after you’ve taken action, don’t forget to share this urgent action alert with as many of your like-minded friends and family as possible so they can take action too.