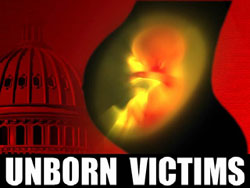 As LifeNews.com reports, North Carolina recently became the latest of more than 25 states to pass legislation protecting pregnant women and their unborn children.

Jenna Nielson, a Raleigh newspaper carrier, was murdered when she was eight and one half months pregnant. Named in honor of Nielson’s unborn son Ethan, “Ethan’s Law,” “recognizes the unborn child as a second victim when the unborn child is injured or dies during the commission of the crime.”

Before the passage of “Ethan’s Law,” criminals could only be charged for the killing or injury of an unborn child in North Carolina if the crime had been committed on federal property. Even abortion advocate Gov. Bev Perdue recognized the inherent injustice of such a reality.

Accordingly, she signed the bill into law stating, “I do support punishing any person who would attack or kill a pregnant woman. I sign this bill today to show that support. I have children of my own and grandchildren. I know the powerful instinct of a mother to protect her children, and I know how I would feel if anyone had harmed my daughters-in-law or me when we were pregnant.”

Gov. Perdue is to be commended for protecting the lives of unborn children who are victims of violent crime. Hopefully, she will reexamine her position on abortion and come to the understanding that life is precious and must be protected.