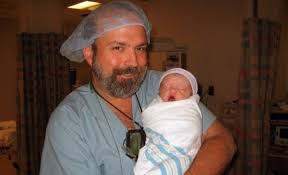 Dr. John Bruchalski, an OB-GYN from Virginia, is a former abortionist. He now leads one of the largest pro-life medicine practices in the U.S. This week, thanks to George Washington University’s Colonials for Life, I had the chance of hearing one of his talks, and now share the basic points he had to say. It is an inspiring story experienced firsthand.

Dr. Bruchalski began with the story of his amazing conversion and the many factors that led him to recognize that he had to care for the two patients: he couldn’t act only on the conscience of the mother, he had also to use his conscience and recognize that the baby was also a human life to care for. After he realized that he wasn’t treating a “tumor”—but rather that a fetus of 21 weeks was a human being as much as a fetus with 23 weeks (viability), he has continuously worked to change his life and practice.

Pro-life and Pro-choice need to have a common language

Dr. Bruchalski calls on both the pro-life and pro-choice sides to fully recognize certain things in order to perform medicine and really care for their patients. A change of the dynamic of the debate is needed. He believes the issue has been stuck in political stands from 1973, and that they need to move past that.

The term “pro-abortion” needs to be recognized by abortion advocates, because “pro-choice” does not accurately describe their position. “Pro-choice” implies that these advocates will be satisfied with a woman’s choice to keep her baby.

Related to this, “pro-choice” groups are starting to realize that they need to change their language, because they’re still with a political viewpoint on “my body, my choice.” They need to start accepting the humanity of the fetus. Even more now, when it’s recognized that more than 50% of Americans declare themselves pro-life, this because they have succeeded in caring for the mother and the baby.

For the pro-life side, Dr. Bruchalski believes in a new pro-life language to care for the woman who’s thinking of having an abortion. You can’t show her an image of a dismembered fetus, because the baby is already “unwanted”, an adversary. He also thinks offering adoption can rub this in a woman’s face as bad decision as she thinks “I couldn’t care for myself enough to get pregnant, and I’m also going to be a bad mother because I can’t take care of my baby”; in the mind of the woman, that’s two mistakes. Abortion then becomes the least difficult answer. Dr. Bruchalski likes to provide women with hope, that there is a life after having a child, and he does this by loving his patients without any regard for their financial/social differences or their beliefs. He even recounts that 6 out of 10 women that decide to proceed with their abortion return to his practice, and he opens his doors for them, knowing that they need care after such a difficult procedure. Because that’s the reality… how can abortion be one type of surgery people don’t usually return for a follow-up? He is trying to fight this culture of embarrassment, of keeping abortion as a taboo or something obscure that impedes women to return to their doctors after the decision.

“Life is not based on someone else’s belief.” He used to practice abortions because he thought that if the mother said it was what she wanted, he was doing good providing that service to her, based on her conscience. But doctors also have a conscience. He believes a doctor can’t leave his or her conscience at the door when performing a surgery. Because doctors deal with people, they first and foremost provide a service of mercy, and you can’t provide a service to people if you are treating them if they were products. Doctors must care for others as persons, recognizing that they’re not treating one “mole” of the woman’s body, they are treating a human life growing inside of her; they are treating also a whole person, a woman with all of her psychological, spiritual and physical features. Women are more than procedures; the patients are more than just profit.

This is Dr. Bruchalski’s motto. He also believes “that the relationship between mom and her unborn baby is the primary relationship not only for the person but for society.” He tries to inject love in medicine, to create a loving atmosphere in which the mother feels safe, an environment in which she would not choose abortion. Hating the disease, but loving the patients. “You can love enough that you make abortion unthinkable.”

Abortion cannot be discarded as a simple procedure, because the relationship between mother and child makes abortion very difficult. This is why abortionists must care more for their patients, make them feel safe and fully understand the difficult situation. Abortion is not just like ripping off a band-aid. The physical and psychological consequences abortion brings (higher breast cancer, infertility and post-abortion syndrome risks, to mention a few) cannot be left aside.

Planned Parenthood has been repeatedly exposed for providing poor service to women in need, from unreliable contraception to hasty abortions. Planned Parenthood is an abortion business—plain and simple. Dr. Bruchalski said “you don’t get rid of poverty by killing the poor”. By offering abortion to low-income people as an answer, they’re not solving a problem. He also criticized Planned Parenthood’s leading role in the culture of death, which they’ve helped create through “sex education,” directed to 10-year-olds who are left thinking about their “choices” when confronting unplanned pregnancies.

An inspiring role in medicine

To be an example of the caring practice he preaches, he founded the Tepeyac Family Center , one of the largest pro-life medical practices in the country, in 1994. It now operates under Divine Mercy Care (tax-exempt health care organization) as the only practice in the country that provides full obstetrical care for patients from Crisis Pregnancy Centers (CPCs), and that serves charity patients on a routine basis.