Unfortunately, many people’s lives will fall into this category. Some for never taking the chance to live and experience the beauty of life. Some for simply dying too young. But some lives are cut short for no good reason. 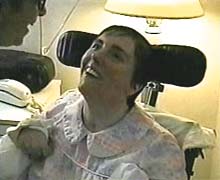 Today marks the 6th anniversary of the death of Terri Schiavo, a Florida woman whose life fell into the hands of the United States court system. If you are unfamiliar with her story, today is an excellent day to learn about her.

A short summary of Terri’s story and death from Fr. Frank Pavone’s blog:

Terri was not in a coma, she was not on life support, and she did not have a terminal illness. Terri was one of those people who cries out for our extra love and support, which her parents and siblings were ready to give her for the rest of her life. I was at Terri’s bedside during her final hours and moments. As she was dying from lack of water, there stood by her head a display of beautiful live flowers, immersed in water. As I blessed and absolved Terri, I assured her of your love. Now I implore you to educate your neighbors.

Her loving parents and siblings were ready to care for her for the rest of their lives. Yet through the actions of her estranged husband and the erroneous decisions of the courts, she was killed anyway. It is perfectly logical and moral to forego useless treatments, but that’s not what Terri’s case was all about. In this case, it was not that treatments were considered useless – it was that a life was considered useless, and that type of judgment is dangerous to us all.

In a nation dominated by a culture of death – the value of life in all its forms in regularly overlooked, ignored and short-changed. In the case of Terri Schiavo, it was stolen and negated. The value of life is not measured by utility or capability. No one asked for extraordinary or experimental treatment for Terri. Her family and those who fought with them simply asked that she be given food and water, that her life might continue until its natural end.

The great irony is that truth always triumphs in the end. The courts and Terri’s husband brought an unnecessary and painful end to Terri’s life. But her memory – her story – is one that will never be silenced. History testifies to this fact. In the times of the Roman Empire, many emperors believed that they could eradicate the plague of Christianity by annihilating Christians. To their disbelief, the emperors discovered that their murderous efforts only yielded more Christians.

And we fight for LIFE, that it might be respected in all its varied stages from conception until natural death.