That’s the tweet Congresswoman Cathy McMorris Rodgers sent out this afternoon, announcing the birth of her second child.

“Brian and I are overjoyed by the birth of our daughter,” Congresswoman Rodgers said on Facebook. “Both the baby and I are healthy and doing well at the hospital. We look forward to bringing her home soon.” 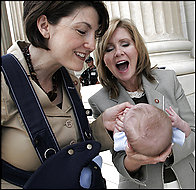