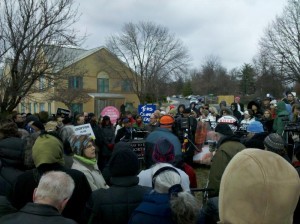 This morning abortionist Leroy Carhart showed up at his new job—performing late term abortions at the Germantown Reproductive Health Services abortion clinic in Germantown, MD, and was greeted with what must by now be a familiar site for him.

One on-the-ground source said that almost 300 pro-lifers were there to protest Carhart’s first day of work in Maryland, including many high school students.

There was a prayer vigil followed by a press conference with local pro-life activists and representatives from local and nationwide pro-life groups including Maryland Right to Life, Concerned Women for America, Christian Defense Coalition, Family Research Council and Students for Life of America.

According to Lifenews.com, Rev. Patrick Mahoney, director of the Christian Defense Coalition said:

“We are gathering on Monday to be a loud and prophetic witness for the dignity of life and human rights. We want to make it abundantly clear that we will prayerfully work to ensure that Maryland does not become the late-term abortion capital of America.” 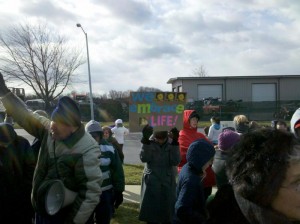 “We also want to send a clear message to LeRoy Carhart that we will never be silent while women are being brutalized and innocent viable children are being killed. We will pray, march, rally and be a prophetic voice until the violence stops.”

Mahoney also told the Washington Post (which reported a large crowd as well, in line with activist’s estimates) that “We don’t want Maryland to become the late-term abortion capital of America.”

Thank you to all the pro-lifers who gathered in Germantown this morning and who plan to be a regular presence at the clinic!