Yesterday, I embarked on a historic journey to Austin, Texas to support pro-life Texans, women, and the unborn! On a bus trip organized by Students for Life of America, we arrived at the capitol Monday around noon. Immediately, we set out for the rotunda where the Texas Stand for Life rally was taking place.

[Read more here about why Texas needs our pro-life support.] 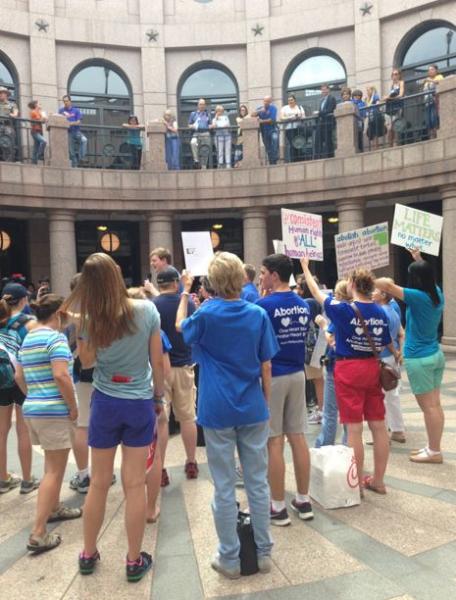 Pro-life advocates stood up and shared their stories with everyone as a sea of blue gathered to support them. Some abortion supporters were present, holding signs against religion and supporting “choice.“ One had the word “theology” crossed out in a circle.

While many pro-life speakers did talk about their faith, God, and used Bible quotes, the legislation being advocated right in Texas right now is not about religion. It is about saving the lives of viable babies, capable of feeling pain, protecting women, and requiring abortion clinics to follow common ground regulations. As the many at Secular Pro-life will attest to, you do not have to be religious to understand the scientific fact that life begins at conception and deserves protection – especially pain capable 20 week old children.

My group had the privilege of meeting with Lieutenant Governor David Dewhurst. He is determined to see this bill passed and informed us that “we won’t allow mob rule in Texas.” To ensure order, the session will start Tuesday morning and will last until 4 or 5 Wednesday morning.

After the meeting, we moved back to the rotunda for even more amazing speeches. When the pro-abortion crowd tried to make noise to disrupt the speakers, pro-lifers outnumbered them and our cheers and clapping drowned them out. It ended with the speaker asking everyone, pro-life and pro-abortion to join in prayer.

As the day drew to an end, we prepared for another Stand for Life rally. Our supporters are numerous and eager to take a stand for life. Keep following for updates!