This month, the Susan B. Anthony List and Women Speak Out PAC field team knocked on its 500,000th door. We’ve concentrated our efforts in three key swing states: Florida, North Carolina, and Ohio. As of today, we have reached over 533,000 doors.

Not only are these states crucial to the presidential election, they are must-wins for keeping a pro-life majority in the Senate.

Since the Democrat’s convention, polling has been favoring Hillary Clinton to win the White House. But as recently as this week, there have been shifts in polling  that look much more favorable to electing pro-life leaders into office. 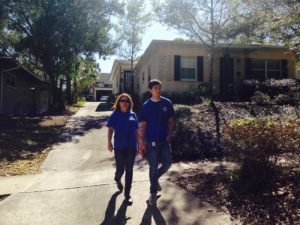 In Florida, a poll came out yesterday showing Donald Trump with a two-point lead over Hillary Clinton. On the  Senate side, Sen. Marco Rubio is leading Patrick Murphy by five-points, though the primary election to officially  determine the GOP and Dem nominee won’t be held until August 30.

In North Carolina, Hillary Clinton holds a thin lead over Donald Trump, by less than 2 points on the average. Sen. Richard Burr is showing a lead by 2 points over challenger Deborah Ross in the most recent polling for the race.

And finally in Ohio, recent polling shows the gap closing in, with a 4-point lead from Hillary Clinton. Sen. Rob  Portman has been doing well in the polls for some weeks now, and the most recent poll shows him up by 8-points.  This is a healthy lead for such a highly contested Senate race.

Our message on the ground has been simple: explain to voters the extreme nature of the pro-abortion platform. We are sharing Hillary Clinton’s beliefs on the issue of abortion: that it should be legal up until the moment of birth, paid for at the taxpayers’ expense.

This message is resonating with voters, and given that these states could likely be decided by razor thin margins, every vote will count.

SBA List is excited by our efforts to knock on over 500,000 doors so far in this election cycle, and you can see a video below of our canvasser who knocked on that door!

We have already surpassed our accomplishments from the 2014 cycle, in which we knocked on 500,000 by Election Day. This year, the goal is to hit one million doors by November 8.