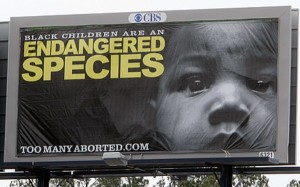 Via the LA Times:

Dozens of billboards have sprouted up over Atlanta tackling the hot-button issue of abortion, this time using a controversial method: race.

The billboards feature the cherubic face of a black baby and a bold statement in large block letters: “Black children are an endangered species.”

The billboards direct people to a website called toomanyaborted.com, which says for African-Americans, abortion has become a crisis.  Nearly 40% of all black pregnancies end in induced abortion, the website says, which is more than three times the rate of white women and two times the rate of all other races combined.