Friday was the day everyone was waiting for. The Texas Senate could potentially pass the bill and send it to Governor Perry’s desk. Both sides were aware of the possibilities and planned accordingly.

The line to enter the gallery started at 5 am. Reportedly, it started with many pro-abortion advocates. Students for Life did not arrive until 11am in order to be a part of the second wave of activists and to stay later for the vote. I passed out red life tape to pro-lifers: whoever entered the gallery, activists would put the tape over their mouths to symbolize the silence of the unborn. By doing this, we remind everyone that there are two victims in abortion, and one who cannot speak for themselves.

While a friend and I were passing out tape, an older woman dressed in peach approached us. She was very friendly and asked if she could have some tape. She denounced the chanting pro-abortion advocates and said she wished the two sides were not so polarized. She said she was a churchgoer who didn’t like abortion, but wanted clinics to remain open.

At the end of our conversation, we explained the purpose and meaning of the life tape. She promised us that if anyone asked her, she would explain that it was for the rights of the unborn. With this promise, we could not refuse her.  Although this woman seemed sincere, I had to ask: If she really does not support abortion and supports the rights of the unborn; why does she insist on abortion clinic remaining open even though there are over 8,000 Community Health Centers across the US that offers quality, whole woman health care, not abortion?

Once this conversation concluded, my friend and I put the life tape to use. We entered the rotunda where pro-abortion protesters had gathered. Standing on the outskirts of the crowd, we put the life tape on our mouths and prayed. After the chanting increased, we knelt down and prayed. Other pro-lifers joined us as we asked God to help us.

The chanting was loud and obnoxious. Some of the more awful chants:

“Prolife that’s a lie; you don’t care if women die!”

“Pro-life men need to go, if you get pregnant let us know!”

“Pray! You need it! Your cause will be defeated!”

As the rotunda become more and more orange, the volume increased. Some pro-lifers walked between us, offering ear plugs. We took a quick break for dinner and gave some pizza to friends waiting in the gallery line. Then, we resumed praying.

To have an idea of what it was like, here are some of the least offensive photos. (Granted, I was out there for about 6 hours so the crowd fluctuated throughout that time). 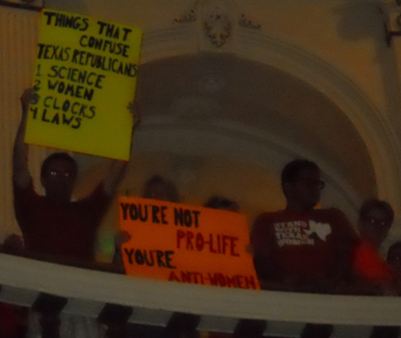 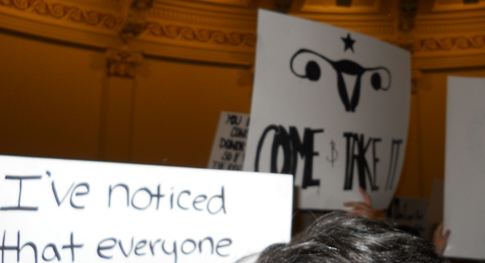 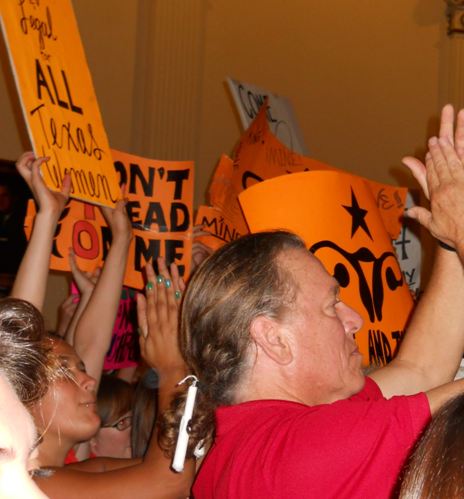 Around 9pm, Cecile Richards, the CEO of Planned Parenthood made an appearance. Her presence further incited the crowd. The chanting become more loud and obnoxious, if that was even possible.

Around 9:30, police swarmed the rotunda. We knew the second vote in the Senate was about to take place so we left to go to a safe place. We proceeded to find safety in a pro-life representative’s office and locked ourselves in.

We watched the proceedings on TV, along with social media and a live stream to find information about what was happening in the gallery and outside. It was reported that jars of feces and urine were confiscated by the police. The rumor was that abortion supporters were planning to throw them at the senators, along with other items. Protestors were also planning to flash “their lady parts.”

Thankfully, late into the night the bill passed! The vote was 19-11 and we celebrated with cheers and hugs. It is a huge victory for the unborn and women! Despite all of the harassment, mocking, and incivility, the pro-life movement came out on top. It is important to remember that the war in not over. Yes, we won this battle but we cannot stop fighting until every person is protected under the law.

I am so grateful to be a part of such a historic even! I thank Students for Life of America for organizing this trip, all of our wonderful supporters who made it possible.