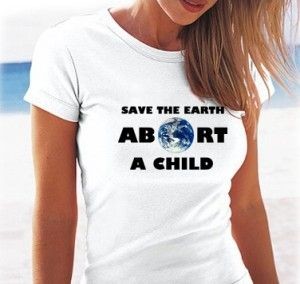 The U.N. Climate Change Conference is going on in Copenhagen this week. Predictably, “climate change” (now widely disputed), is inevitably linked to “overpopulation,” (also widely disputed) and Copenhagen is proving to be an example that the bigger the venue, the more ridiculous the ideas will become. Case in point: Li Xing of The China Daily reported this week that China is celebrating its success in reducing its yearly CO2 emissions.

Zhao Baige, vice-minister of National Population and Family Planning Commission of China (NPFPC), said this week that “as a result of the family planning policy, China has seen 400 million fewer births, which has resulted in 18 million fewer tons of CO2 emissions a year.”

Never mind that China, infamous for its “one child per family” policy, is currently in the midst of a huge population crisis. Social preference for male children has led to a huge increase in the abortions of female children and the country is now facing male to female ratio imbalance. Similarly, the Chinese are aging quickly—and without enough children to care for the elderly. Chinese adults are now part of what is called the “sandwich generation” –they must take care of their children and their elderly relatives.

But at least green house gas emissions are down, thank goodness! Vice-minister Baige said “studies have also shown that family planning programs are more efficient in helping cut emissions.” According to the Thomas Wire of London School of Economics:

“’Each $7 spent on basic family planning would reduce CO2 emissions by more than one ton’ whereas it would cost $13 for reduced deforestation, $24 to use wind technology, $51 for solar power, $93 for introducing hybrid cars and $131 electric vehicles.”

With that in mind, if you’re not lucky enough to live in a country with a one-child policy, you could always donate to the Optimum Population Trust (Opt), a new organization based out of the U.K. From the John Vidal at The U.K. Guardian:

“Consumers in the developed world are to be offered a radical method of offsetting their carbon emissions in an ambitious attempt to tackle climate change – by paying for contraception measures in poorer countries to curb the rapidly growing global population.

“Optimum Population Trust (Opt) stresses that birth control will be provided only to those who have no access to it, and only unwanted births would be avoided. Opt estimates that 80 million pregnancies each year are unwanted.” [italics mine]

Newsflash: You need a pregnancy and an actual baby in the womb before a “birth” can be deemed “unwanted.” Looks like birth control means abortion. The cheapest way to reduce carbon emissions is to abort babies. So the next time you take an international flight, Vidal reports, the approximate 10 tons of CO2 emitted by the flight could be offset “by enabling the avoidance of one unwanted birth in a country such as Kenya.”

Looks like nothing says “I care about the environment” more than paying for the abortions of poor women in third world countries.

Jill Stanek has more.
More on the lies of United Nations Population Fund.