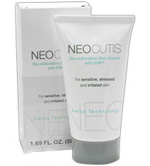 Valerie Richardson of the Washington Times reported yesterday that Neocutis Inc., a San Francisco based cosmetics company, has been using skin cell proteins from an aborted baby boy in its products. Pro-life activists from Children of God for Life and American Life League—to name a few—are outraged.

Richardson writes that the “ingredient” was “developed” in Switzerland at the University of Lausanne. A 14-week-old baby boy was aborted on-demand and then donated to the university. According to Neocutis Inc., the child was aborted because he was not expected to survive to full term. The piece of the baby’s skin donated to Neocutis for research was described as the size of a postage stamp.

On their website, Neocutis defended its use of the baby’s body, citing that all the measures were approved by the hospital’s ethics committee, and were in line with Swiss regulations. Furthermore, “no additional fetal biopsies will ever be required.”

This latest injustice towards the unborn children of this world is particularly gruesome and speaks to the fanatical level of vanity popular culture has generated in this world. We have now reached a point where not only are children destroyed because they are unwanted, but now their bodies are literally consumed—both for profit, and a vain desire to eliminate wrinkles and other skin imperfections.

The off-hand dismissal of Neocutis Inc. that the piece of skin taken from the aborted baby boy was no larger than a postage stamp is sickening and sad. As president of American Life League, Judie Brown pointed out, “They say the skin sample was the size of a postage stamp – well, something that size could mean the whole back,” After all, a whole and fragile unborn baby of 14 weeks is not much bigger.

In a society where organizations like PETA hold mass rallies to protest cosmetics testing and other experiments on animals, why is there silence when it comes to the immoral and savage usage of the least among us?