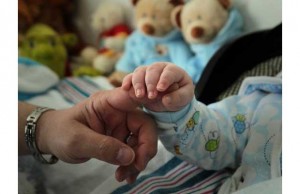 “Baby Joseph napping at home in his crib on Easter Sunday is all the proof his father needs that his Ontario doctors were wrong. Only months ago, the fate of 15-month-old Joseph Maraachli was a question mark. Doctors at London Health Sciences Centre in London, Ont., sought to take the infant off life support as he battled a progressive neurological disease. But on Sunday, the round-cheeked baby was home in Windsor, resting in a cradle packed with plush toys. Now and then he opened his eyes or wriggled a little, or moved his arms beneath father Moe Maraachli’s occasional touches and kisses. When Maraachli held out a finger at one point, Joseph’s own stubby fingers curled around it.”

“I feel victorious,” Moe Maraachli, Joseph’s father, said. “I feel I won, and my baby is alive.”

His life was worth it. Baby Joseph is home and his family could celebrate Easter with peace of mind and the joy that a baby brings to a family. They were wronged and something needs to be done to ensure it doesn’t happen to another family. But for now, let’s celebrate that Baby Joseph is alive and that his family had the courage and love to fight for his life.