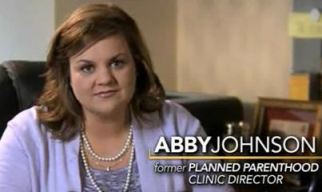 Former abortion clinic director (and “employee of the year”!) Abby Johnson left Planned Parenthood after assisting in an ultrasound abortion and witnessing an unborn baby fight for, and ultimately lose, its life. After giving up the career she had advanced for almost a decade, Abby was unsure where to turn – fortunately she had friends in the pro-life movement, namely Sean Carney at 40 Days for Life.

After publishing her book unPlanned, in which she recounts her experience working at Planned Parenthood, Abby continued to want to help women, which was, and is for many abortion workers, what drove her to become actively involved in Planned Parenthood in the first place. She also wanted to help abortion clinic employees like herself.

That’s why she started And Then There Were None (ATTWN), a ministry dedicated to helping former abortion clinic workers  financially, emotionally, legally, and spiritually as they leave their abortion work and even potentially become advocates for Life. Abby’s work has revealed that, like many women who choose to abort, many abortion workers remain in the industry because they feel they have no other option to support themselves and their families.

A few weeks ago, Abby and other former abortion workers launched the webcast “Exposing the Lie” in which they shared the truth about their experiences working in the abortion industry. Five former and current abortion clinic workers have since contacted ATTWN wanting out of the abortion industry! And, because of the support of Abby’s new ministry and passionate pro-lifers, these courageous people can be helped.

Check out some of the stories of these clinic workers that Abby recently shared by email with ATTWN supporters (To protect their privacy, their names have been changed):

“Claire” found ATTWN after getting word of the ministry from a sidewalk counselor who had reached out to her.  She is a single mother doing everything she could to secure a new job just to pay her bills- even applying for a job at Burger King.  Because she had worked at a health center that performed abortions, potential new employers are very hesitant to hire her.  Claire worked at the abortion clinic for eight months before she “couldn’t take it anymore,” and got sick of seeing body parts of the aborted babies. The clinic contacts Claire several times a month, asking her to come back to work, and even offering her more money to return… but she is staying strong!  She was on the brink of evacuation from her home, but ATTWN was able to help her keep her water and electricity running while helping her search for a new job.

“Amy” is a single mother of four children who worked in the abortion industry for four years.  In the beginning, she did office work.  But, as time went on, she was asked to assist in the procedures, which included a bonus for every abortion performed.  Amy reached out to another pro-life group who was able to refer her to ATTWN.  Her biggest worry after leaving the abortion industry is being able to care for her four children and fears what the legal implications for her would be if she came forward with information about illegal activity in her clinic.  Since ATTWN is able to provide legal assistance to former workers, she will be able to protect her family if she wants to come forward with the information.

“Mallory” is a single mother of seven who worked in the abortion industry for seventeen years before she quit.  Although she has another part-time job, she struggles to pay her bills and pay for food while simultaneously supporting her children in college.  Along with Mallory is eager to bring to light the illegal activity that was rampant in the abortion clinic where she worked: sexual harassment from the doctor, patient abuses, and financial fraud.  With the legal protection that ATTWN provides, Mallory will be able to feel secure in exposing the illegal activity in the abortion clinic where she once worked.

Let’s hear it for Abby Johnson and ATTWN for standing up for Life and helping abortion clinic employees. Head over to www.attwn.org to learn more.