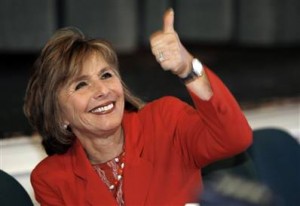 Last night, Senator Barbara Boxer took to the House floor for the debate on the pro-life Nelson amendment, which would prevent taxpayer dollars from paying for abortion on-demand and insurance plans that would cover abortion on-demand. Sen. Boxer opposes the amendment because it infringes on “women’s privacy.” She went on equate an abortion procedure to a prescription for Viagra.

“Is it fair to say to a man you’re going to have to buy a rider to buy Viagra?” she asked.

Are you kidding me?

Taking a medication designed to improve your sexual life is NOT the same as ending the life of an innocent child with a gruesome and violent medical procedure. So far as I know, Viagra does not leave men emotionally scarred years after its usage (if ever!).

What’s most important as we debate the use of federal funds for the purpose of abortion as a part of health care reform—is that the vast majority of Americans (61%!) do not morally object to the use of Viagra. Of course, there isn’t much in the way of polling on this matter, but the principle is sound. The pro-life majority in American does not want its tax dollars going towards abortion.

Sen. Boxer’s callous comparison of Viagra usage to an abortion is an insult to pro-life Americans, and all the post-abortive women who are suffering.