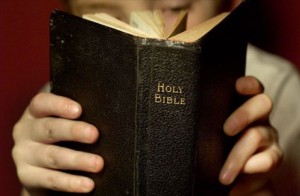 It may seem like an oxymoron to us, but that’s what Rev. Carlton Veazy, president and CEO of the Religious Coalition for Reproductive Choice, said yesterday in Washington, D.C. The Capitol was teeming with pro-aborts, led by Planned Parenthood, NARAL, and NOW. Somewhere between 500-1,000 (this year the March for Life had 12,000 people!) abortion advocates were in D.C. for a “stop Stupak” rally, in opposition of the Rep. Bart Stupak (D-MI) and the pro-life Stupak-Pitts amendment that passed last month in the House of Representatives.

This type of ridiculous comment is not uncommon for Rev. Veazy and the Religious Coalition for Reproductive Choice. LifeNews reports that not only is Veazy a staunch advocate for tax-payer funded abortion, he criticized President Obama for his “common ground” language. RCRC is also affiliated with the infamous Rev. Katherine “Abortion is a blessing” Ragsdale. What Bible are these people reading!?

If you are a person of faith—it doesn’t matter if you prefer a literal or spiritual interpretation of the Bible—there is just no way to justify abortion by an appeal to God. Scripture clearly implies that Life begins at conception; all biblical evidence points us to the pro-life position:

“Before I formed you in the womb I knew you, before you were born I set you apart; I appointed you as a prophet to the nations.” Jeremiah 1:5

“Your eyes saw my unformed body. All the days ordained for me were written in your book before one of them came to be.”  Psalm 139:16

“For you created my inmost being; you knit me together in my mother’s womb.”Psalm 139:13

“Did not He who made me in the womb make them? Did not the Same One for us both within our mothers?” Job 31:15

“When Elizabeth heard Mary’s greeting, the baby leaped in her womb, and Elizabeth was filled with the Holy Spirit.” Luke 1:41

Whether you believe these stories literally happened or that these words were written merely as metaphors to teach us how to act and think, the conclusion is the same—God is pro-life! And some so-called “believers” need to get their facts checked!