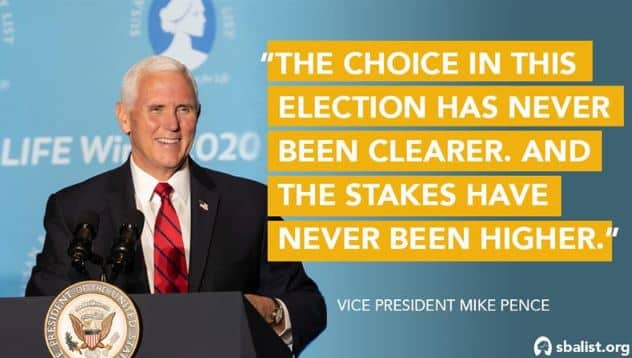 Washington, D.C.  – Tonight at the Republican National Convention, Vice President Mike Pence called out Joe Biden and Kamala Harris for supporting taxpayer-funded abortion on demand up to the moment of birth.

“We are proud to have a president and vice president who stand unapologetically for life. The contrast to the Democrats is stark,” said SBA List President Marjorie Dannenfelser, who serves as national co-chair of Pro-Life Voices for Trump. “While Joe Biden, Kamala Harris, and other prominent Democrats spent their entire convention downplaying their radical agenda, Americans watching the Republican National Convention have heard the most explicit pro-life messages since then-candidate Donald Trump exposed Hillary Clinton’s extreme support for late-term abortion in the final debate of 2016. The contrast between the two sides could not be clearer. Life is winning and Americans support compassionate pro-life policies that safeguard the lives of unborn children and their mothers.

“This extraordinary moment would not be possible without the bold leadership of President Trump and Vice President Pence. Thanks to them, the Republican Party is unified and energized on this issue and life is winning in America.”

Dannenfelser is the author of “Life is Winning,” which details how the pro-life cause went from being perceived as a political “problem” to a winning issue. She also describes how pro-life advocates like Abby Johnson and citizen journalist David Daleiden have exposed Planned Parenthood’s role in the brutal harvest and sale of baby body parts. The book is available in stores and online at www.lifeiswinningbook.com.

SBA List is tracking the abortion extremism of the Harris-Biden ticket at www.LifeOnTheBallot.com.