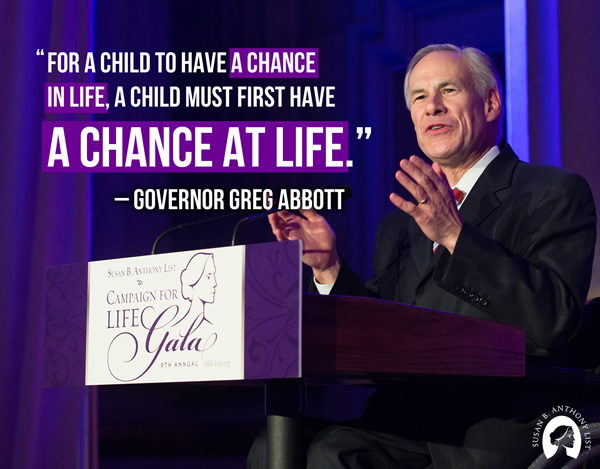 Washington, D.C. – Today Texas Governor Greg Abbott (R) signed into law the Heartbeat Act, legislation to ban abortion in the state as early as a fetal heartbeat can be detected. The national pro-life group Susan B. Anthony List praised the effort, saying:

“We thank Governor Abbott and pro-life legislators in Texas for enacting law that reveals the humanity of unborn children in the womb,” said SBA List State Policy Director Sue Liebel. “There is a groundswell of pro-life activity happening in state legislatures across the nation as lawmakers challenge the extreme status quo permitted by Roe: abortion on-demand, up until the moment of birth. Since January, 536 pro-life bills have been introduced with more than 60 signed into law – a strong rebuke of the deeply unpopular abortion agenda being pursued by the Biden-Harris administration and their allies in the abortion lobby.”

A growing body of literature and emerging science continually affirms the humanity of unborn children.