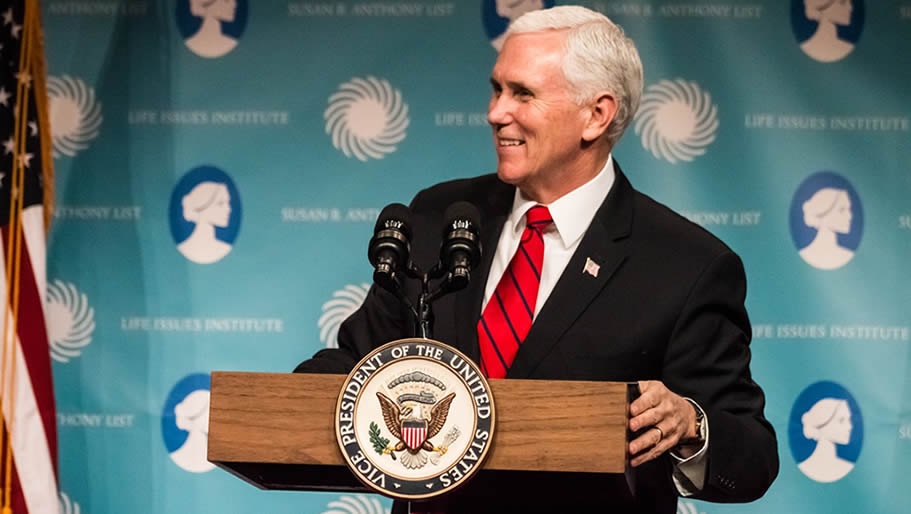 Washington, D.C.  – Today the Trump administration unveiled steps that the U.S. Department of Health & Human Services and the U.S. Department of Justice are taking to enforce federal conscience protection laws, known as the Weldon and Church amendments, by holding California and Vermont officials accountable for anti-life discrimination.

The announcement was made during a “Life Is Winning” event hosted by Vice President Mike Pence, highlighting President Trump’s pro-life accomplishments. SBA List President Marjorie Dannenfelser and March for Life Action President Tom McClusky presented a letter from more than 70 national and local pro-life groups thanking President Trump and his administration for their unprecedented pro-life leadership.

Dannenfelser praised the Trump administration’s action today in a statement:

“By prioritizing life and conscience, President Trump, Vice President Pence, Secretary Azar, Attorney General Barr, and Director Severino have set the standard for future pro-life administrations. Under their strong leadership, life is truly winning in America. Federal conscience laws are more essential than ever at a time when pro-abortion Democrat-led states have tried to force health care professionals and entities, like nurses and insurance providers, to participate in abortion. Abortion is not health care; it is the destruction of innocent human life.

“Additionally, we now face the threat of a pro-abortion White House and a Cabinet stacked with radicals like Xavier Becerra, who has spent his career going after health professionals, charities, churches, and nuns who refuse to promote abortion on demand. The Weldon and Church conscience amendments are not optional, they are federal law. Any incoming administration must enforce them and respect the foundational American freedoms and values they reflect. We thank President Trump for taking assertive action now, and for delivering one pro-life victory after another over the past four years.”

Earlier this year, the U.S. Department of Health and Human Services (HHS) announced it would take action against California for violating the Weldon Amendment, longstanding federal law that prohibits discrimination against organizations that do not cover abortion in their health care plans.

The Weldon amendment states that federal taxpayer funds cannot be made available to states that subject a health care entity (including health care plans) to discrimination on the basis that they do not provide coverage for abortion. The text does not stipulate what reasons are allowable for not covering abortion. Previously the Obama administration unilaterally reinterpreted the Weldon Amendment to allow California to force all state-regulated health insurance plans to cover abortion on demand.

Previously in 2019, the Office for Civil Rights (OCR) at HHS announced it would take steps to bring University of Vermont Medical Center into compliance with federal law in the case of a nurse who was forced to assist in an elective abortion.

The Church Amendment, federal law enacted in the 1970s after the Roe v. Wade and Doe v. Bolton Supreme Court rulings, prohibits hospitals funded by the Public Health Service Act from discriminating against doctors and nurses who refuse to participate in abortion. The Church Amendment protects abortion-related conscience rights of both individuals and institutions. For more information, see Charlotte Lozier Institute’s special report “Unconscionable: Threats to Religious Freedom and Rights of Conscience in the Abortion Debate.”