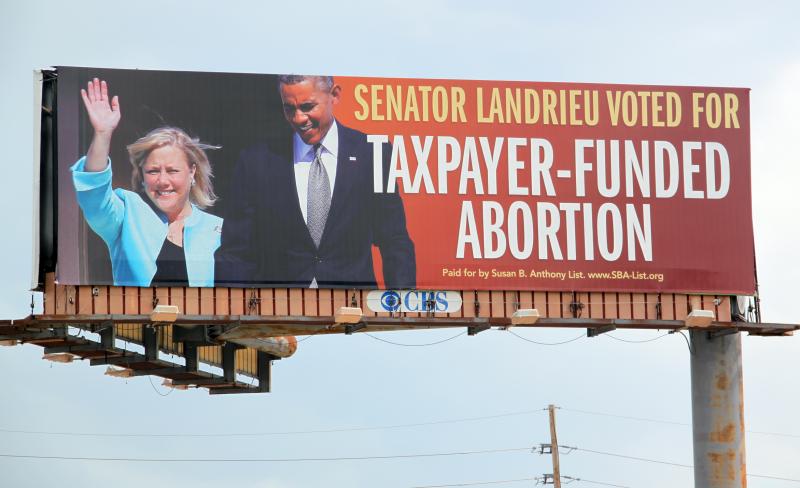 Washington, D.C. – National and statewide pro-life leaders will gather this morning in Metairie, Louisiana to call on pro-life voters to defeat Senator Mary Landrieu (D-LA) in the midterm election cycle and discuss a new billboard  at the intersection of Causeway Blvd. and Veterans Blvd. Women Speak Out PAC, a partner of the national pro-life group Susan B. Anthony List (SBA List), will co-sponsor the press conference with the  National Right to Life Victory Fund and the featured speaker will be Dr. Alveda King, niece of Dr. Martin Luther King, Jr. and Director of African American Outreach for Priests for Life*.  The billboard draws attention to Senator Landrieu’s record of supporting taxpayer funding of abortion and is visible from the press conference location at Veterans Memorial Square.

“Senator Landrieu has failed to stand up for pro-life Louisiana values and must be defeated,” said Women Speak Out PAC President Marjorie Dannenfelser.  “Not only has Senator Landrieu voted for taxpayer funding of abortion and against conscience rights, she refuses to support a common sense, compassionate limit on abortion after 5 months. That’s more than halfway through pregnancy and the point at which the unborn child can feel excruciating pain. Senator Landrieu callously dismissed this abortion limit, which is supported by the majority of Americans, including women, as a ‘shame,’ saying that it’s ‘not the norm’ for babies born at 20 weeks to live outside the hospital.”

“To date, the Women Speak Out PAC team has knocked on more than 61,000 doors across the state,” said WSO Louisiana State Director Ruth Wisher. “From now until Election Day, we will pound the pavement even harder working to expose Senator Landrieu’s extreme support of taxpayer-funded abortions and gruesome late abortions after 5 months of pregnancy.”

The Pain-Capable Unborn Child Protection Act, introduced in the U.S. Senate by Sen. Lindsey Graham (R-SC), has 40 cosponsors. National polling by Quinnipiac, National Journal, Huffington Post, NBC/Wall Street Journal, and Washington Post/ABC News all found that a plurality or majority of Americans support limiting abortion after 20 weeks and that women support the measure in higher proportions than men. 11 states, including Louisiana, have passed state-based versions of this legislation.