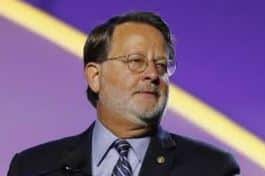 Peters in Company of Abortion Extremist Kamala Harris, Among Others

Washington, D.C.  – The national pro-life group Susan B. Anthony List (SBA List) today launched the updated Susan B. Anthony List National Pro-Life Scorecard, a tool to inform voters ahead of election day exactly where their elected officials stand on life with a simple letter grade, backed up with voting and leadership history. Michigan Senator Gary Peters has received an F grade on the Scorecard for his scathing record on life.

Peters is in the company of every other Democratic Senator running for re-election – all have F grades.

“Our Scorecard shows that pro-abortion Democrats led by Kamala Harris have voted in lockstep in favor of late-term abortion, taxpayer-funded abortion, and even infanticide,” said SBA List President Marjorie Dannenfelser. “Senator Gary Peters is no better – he has consistently voted against measures that would protect unborn children, against efforts to protect taxpayers who don’t want to pay for abortions, and against the confirmation of strong judges and justices who would respect the Constitution. Peters must be held accountable for his abortion extremism.”

The SBA List/Women Speak Out PAC Ground Team has already visited nearly 80,000 voters in Michigan, exposing the abortion extremism of Gary Peters and the Biden-Harris ticket. Learn more at www.LifeOnTheBallot.com.