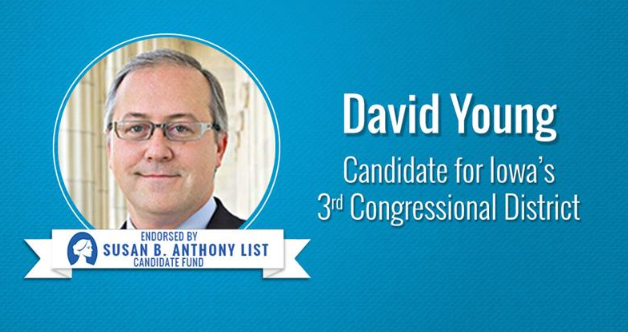 “David Young is a proven leader who established a flawless pro-life record during his time in Congress. We are pleased to endorse him once again,” said Marilyn Musgrave, SBA List’s Vice President of Government Affairs. “David’s commitment to mothers and babies – both born and unborn – is unwavering. He has consistently championed pro-life priorities, including legislation to stop late-term abortions after five months of pregnancy, end taxpayer funding of abortion, and safeguard conscience rights. We are eager to see a rematch with Democrat Cindy Axne, an extremist who sides with Nancy Pelosi over her constituents in refusing to protect babies born alive in failed abortions, earning an ‘F’ on our Pro-life Scorecard. With his tireless work ethic and firm commitment to Iowa’s values, David Young will represent the Hawkeye State honorably. We urge voters to send him back to Washington.”

David Young represented the 3rd District in Congress from 2015 to 2019. Previously he served as chief of staff to U.S. Senator Chuck Grassley. While in Congress, Young co-sponsored the Conscience Protection Act, the Life at Conception Act, the Pain-Capable Unborn Child Protection Act, and the Title X Abortion Provider Prohibition Act. A sixth-generation Iowan, he lives in Van Meter.