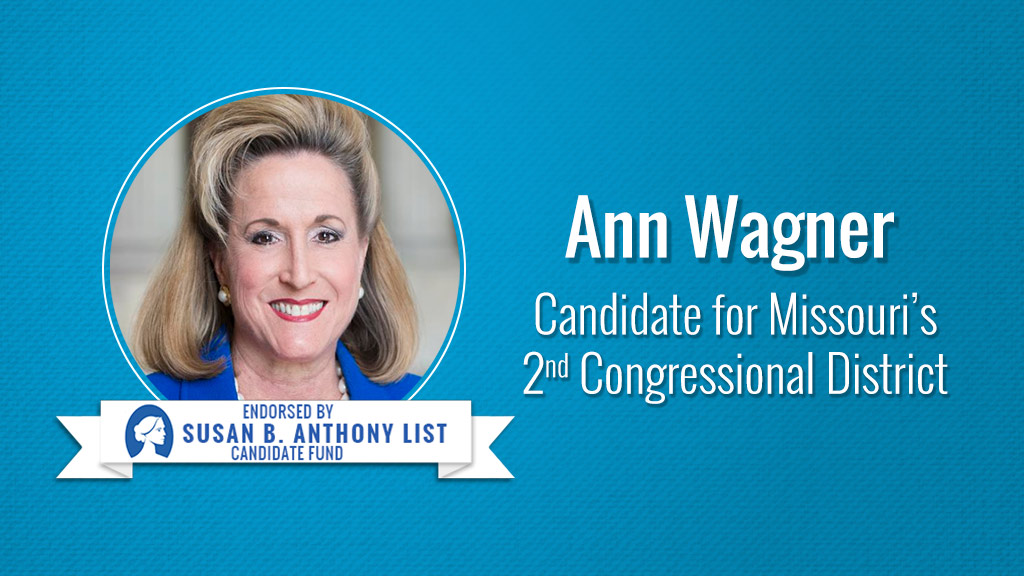 “We are proud to endorse Congresswoman Ann Wagner – one of Congress’ most passionate defenders of mothers and their babies, both born and unborn,” said SBA List President Marjorie Dannenfelser. “Ann is a champion in the fight to pass legislation protecting babies born alive during failed abortions, in the face of extraordinary obstruction by Pelosi Democrats in the House. Throughout her time in Congress she has been a tireless advocate for the most vulnerable, earning an ‘A’ on our National Pro-Life Scorecard for her leadership. Her opponent is an extremist backed by radical pro-abortion groups like EMILY’s List and Planned Parenthood and is dramatically out of step with Missouri’s strong pro-life values. We encourage Missourians to re-elect Congresswoman Wagner and look forward to her victory in November.”

Rep. Ann Wagner has served Missouri’s 2nd District in Congress since 2013. She introduced the Born-Alive Abortion Survivors Protection Act and co-led a hearing on the need to pass this legislation to protect babies who survive abortions. She is also the lead sponsor of the Prenatal Nondiscrimination Act (PRENDA) and a co-sponsor of the Conscience Protection Act, the Dismemberment Abortion Ban Act, the Defund Planned Parenthood Act, the No Taxpayer Funding for Abortion and Abortion Insurance Full Disclosure Act, the Pregnancy Discrimination Amendment Act, and the SAVE Moms and Babies Act.

Rep. Wagner’s career spans over 30 years in the private sector, community and public service, and politics. She served as U.S. Ambassador to Luxembourg from 2005 to 2009. Previously she was chair of the Missouri Republican Party for six years and co-chair of the Republican National Committee for four years. She and her husband Ray have three children and one granddaughter. They reside in Ballwin, Missouri.