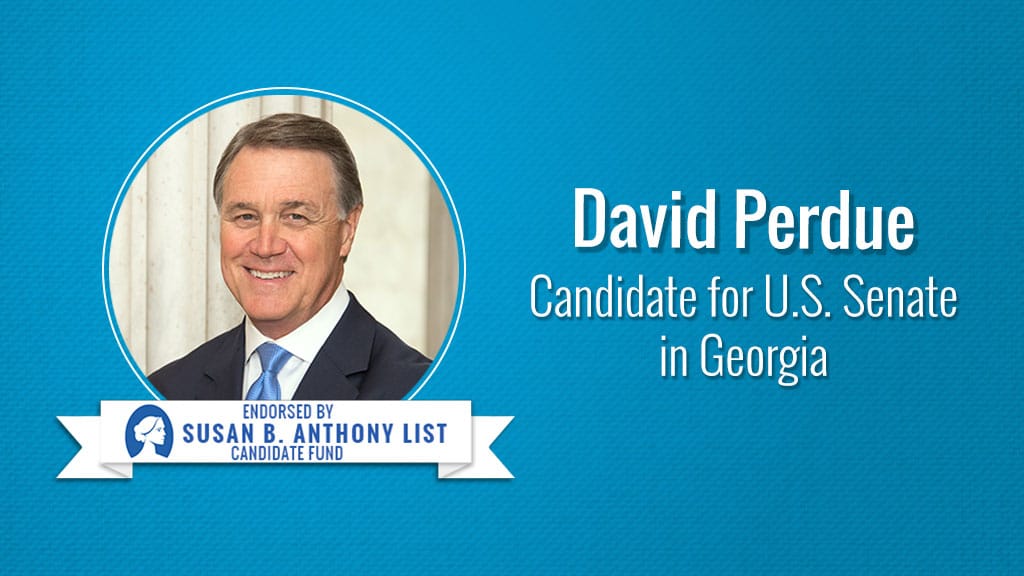 “Senator David Perdue believes strongly in defending the innocent unborn,” said the Honorable Marilyn Musgrave, SBA List’s vice president of government affairs. “During his first term, Senator Perdue has been a leader in the fight to end late-term abortion and infanticide and stop taxpayer funding of abortion, in spite of unprecedented Democratic obstruction. His opponent Jon Ossoff is an extremist who supports abortion on demand through birth and promises to vote only for pro-abortion judges. Ossoff is beholden to the big abortion lobby led by Planned Parenthood, which spent six figures on his failed 2017 campaign. Georgians value life and deserve pro-life champions in the U.S. Senate. We look forward to seeing Senator Perdue re-elected.”

Perdue has represented Georgia in the U.S. Senate since 2015. His consistent pro-life record has earned him an “A” rating on SBA List’s National Pro-Life Scorecard.  He is a co-sponsor of the No Taxpayer Funding for Abortion Act, the Pain-Capable Unborn Child Protection Act, and the Born-Alive Abortion Survivors Protection Act.

Originally from Macon, Georgia, Perdue spent more than 40 years in the private sector before running for office, serving as the CEO of Reebok athletic brand and Dollar General stores. David and his wife Bonnie live in Glynn County, Georgia and attend Wesley United Methodist Church. They have two sons and three grandsons.