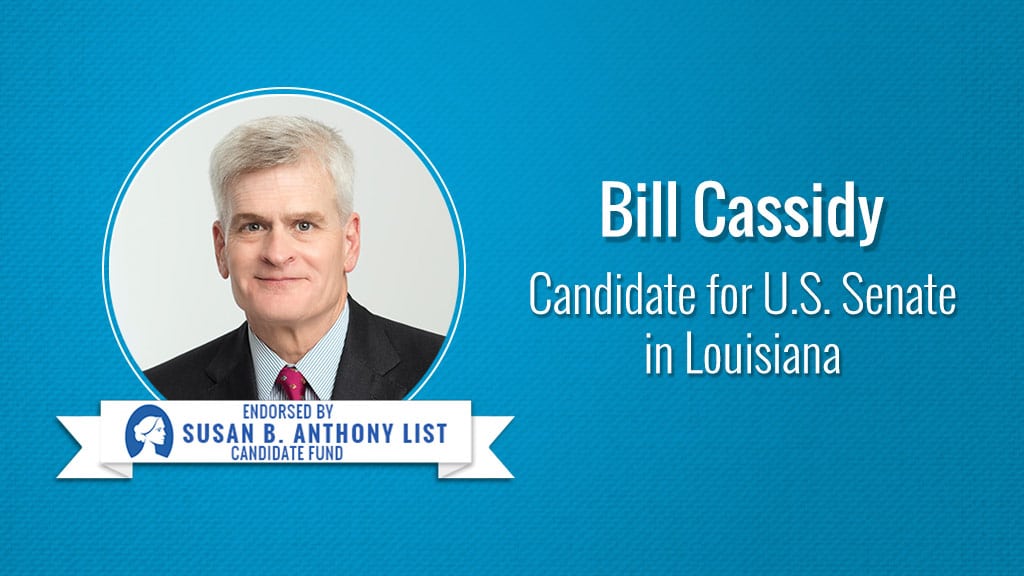 “As one of three physicians in the Senate, Dr. Bill Cassidy is a dauntless champion for life,” said the Honorable Marilyn Musgrave, SBA List’s vice president of government affairs. “Dr. Cassidy has spent his career selflessly caring for others, serving the most vulnerable, and improving the lives of thousands of Louisianans – particularly children and the disadvantaged. He speaks with authority in refuting the lies of the abortion industry and advocating real health care. Unlike his extreme pro-abortion Democratic opponents, he is unashamedly pro-life and stands with the people of Louisiana, who have worked to enact common sense pro-life policies that protect women and babies from the profit-seeking abortion industry. He called the recent Supreme Court decision striking down Louisiana’s pro-life admitting privileges law ‘a strike against life,’ and we at SBA List could not agree more. We know Dr. Cassidy will continue to be a bold voice for life upon his re-election, and we are proud to support him.”

Dr. Bill Cassidy has served in the U.S. Senate since 2014. Prior to his time in the Senate, he served in the Louisiana Senate and then the U.S. House of Representatives, where he was a member of the Bipartisan Congressional Pro-Life Caucus. His 100% pro-life voting record has earned him an “A” rating on SBA List’s National Pro-life Scorecard.  He is a co-sponsor of the No Taxpayer Funding for Abortion Act, the Pain-Capable Unborn Child Protection Act, and the Born-Alive Abortion Survivors Protection Act.

Dr. Cassidy hails from Baton Rouge, Louisiana, and is the co-founder of the Greater Baton Rouge Community Clinic. He and his wife, Dr. Laura Cassidy, are both physicians and provide health care services to those in need within their community. They have three children and attend Chapel on the Campus.