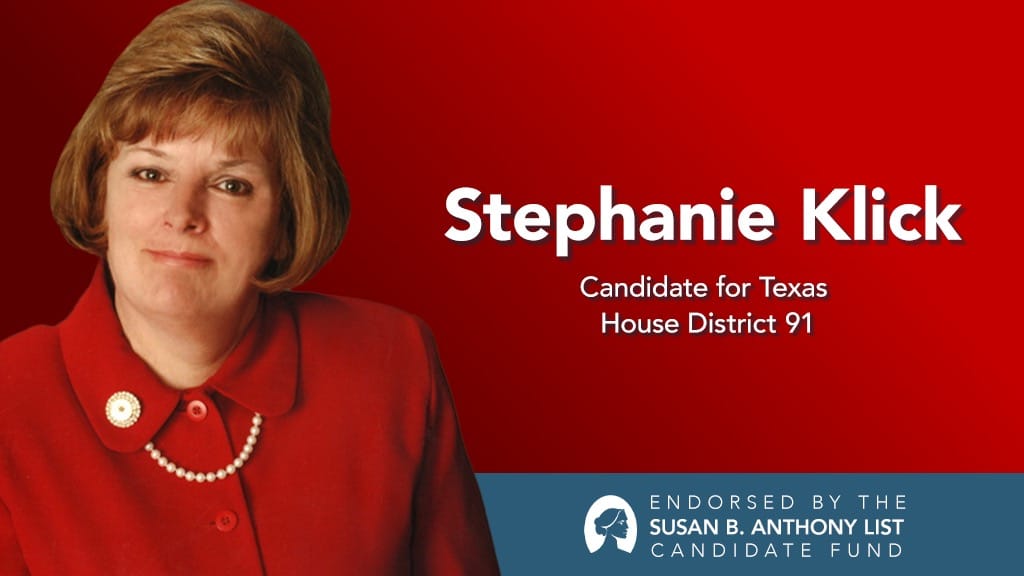 “Rep. Stephanie Klick is a leading champion for life in the Texas Legislature. She has fought tirelessly to stop late-term abortion and live-dismemberment abortions when unborn babies can feel pain, as well as spearheading protections for babies born alive in failed abortions,” said the Honorable Marilyn Musgrave, SBA List’s vice president of government affairs. “This session Rep. Klick sponsored several major pro-life bills – all signed into law by Gov. Greg Abbott – to protect unborn children with beating hearts, safeguard women against the urgent public health threat of mail-order abortion drugs, and protect babies throughout pregnancy should Roe v. Wade be reversed. The Heartbeat Act alone has saved as many as 10,000 lives to date. In addition, she authored a budget amendment to raise funding for the state’s life-affirming Alternatives to Abortion program to $100 million per year.

“Rep. Klick’s efforts have been instrumental in making Texas one of the nation’s most protective states for women and children. We are honored to have her as a member of our Pro-Life Women’s Caucus and to endorse her for re-election.”

Representative Stephanie Klick is a native of Fort Worth, Texas. She was first elected to serve Texas’ 91st District in 2012 and is a member of SBA List’s National Pro-life Women’s Caucus. In 2017 she was named one of Texas Right to Life’s Pro-Life Heroes. A nurse by trade, she has nearly 40 years of experience in the field. She and her husband Don have four children.