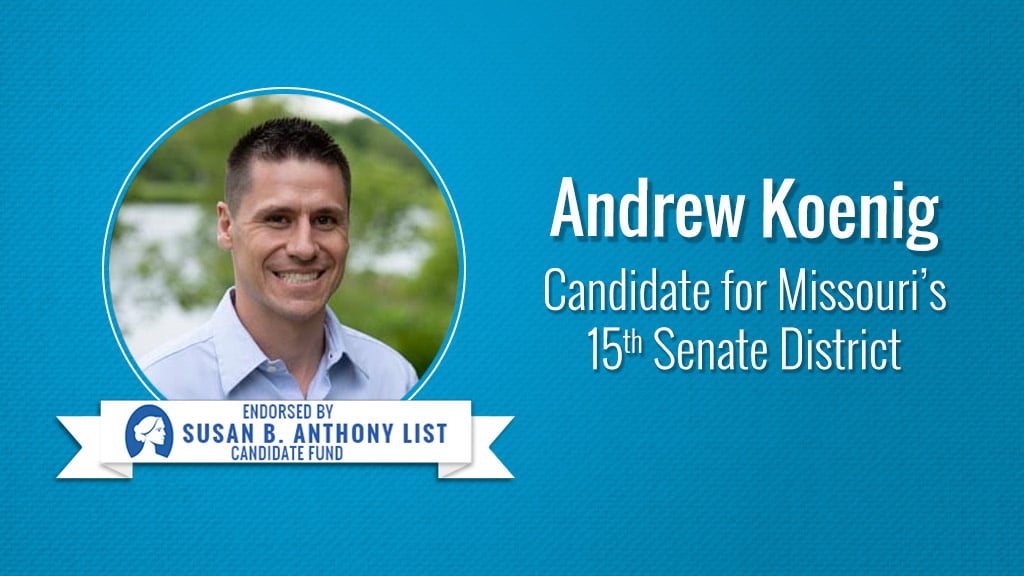 “State Senator Andrew Koenig is a steadfast champion of the most innocent and vulnerable, personally and in public office,” said SBA List Candidate Fund Vice President Marilyn Musgrave. “Andrew has a passion for service and a father’s heart. It shows in the way he and his family have opened their home to children in need. As a legislator he spearheaded successful efforts to pass some of the nation’s strongest protections for the unborn and their mothers, signed into law by Governor Parson. His record stands in stark contrast to his opponent, extremist Deb Lavender, who is backed by the big abortion lobby and consistently votes down popular pro-life initiatives like parental notification, health and safety standards, and even legislation to stop late-term abortions halfway through pregnancy. Missourians deeply value life and deserve strong pro-life leaders at the Capitol. We are proud to endorse Sen. Koenig and encourage voters to support him.”

Koenig served in the Missouri House of Representatives from 2009-2015 and was elected to the state Senate in 2016. He played a key role in the passage of the Missouri Stands for the Unborn Act (H.B. 126), which includes provisions limiting late-term abortions after five months of pregnancy, when science shows unborn children can feel pain; declaring the state of Missouri and all its political subdivisions a “sanctuary of life”; banning discriminatory abortions for reasons of sex, race, or Down syndrome; requiring abortionists to have adequate malpractice insurance; and more. He maintains a 100% pro-life voting record.

Koenig is a local business owner and insurance adjuster. He and his wife Brooke are foster parents and have five children of their own. They live in Manchester, Missouri, and attend West County Assembly of God.