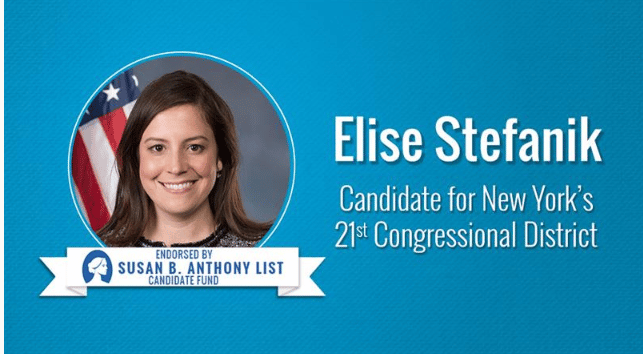 “We are pleased to endorse Congressman Stefanik’s re-election bid so she can continue to fight for unborn children and their mothers in Washington,” said the Honorable Marilyn Musgrave, SBA List’s Vice President of Government Affairs. “During her time in Congress, Elise has voted in favor of protecting babies born alive after failed abortions and stopping cruel late-term abortions after five months of pregnancy – both major pro-life priorities that are shamefully blocked with Pelosi Democrats in control of the House. We are thankful to Elise not only for her pro-life votes, but also for her leadership in promoting strong women in office across the nation as we work to stop Democrats’ extreme abortion agenda in Congress.”

Rep. Stefanik was first elected in 2014 and became the youngest woman ever to serve in Congress. Before serving in the House, Stefanik served in the Bush administration on his Domestic Policy Council. An honors graduate of Harvard University, Elise grew up working for her family’s small business. She lives with her husband, Matt in Schuylerville, New York.