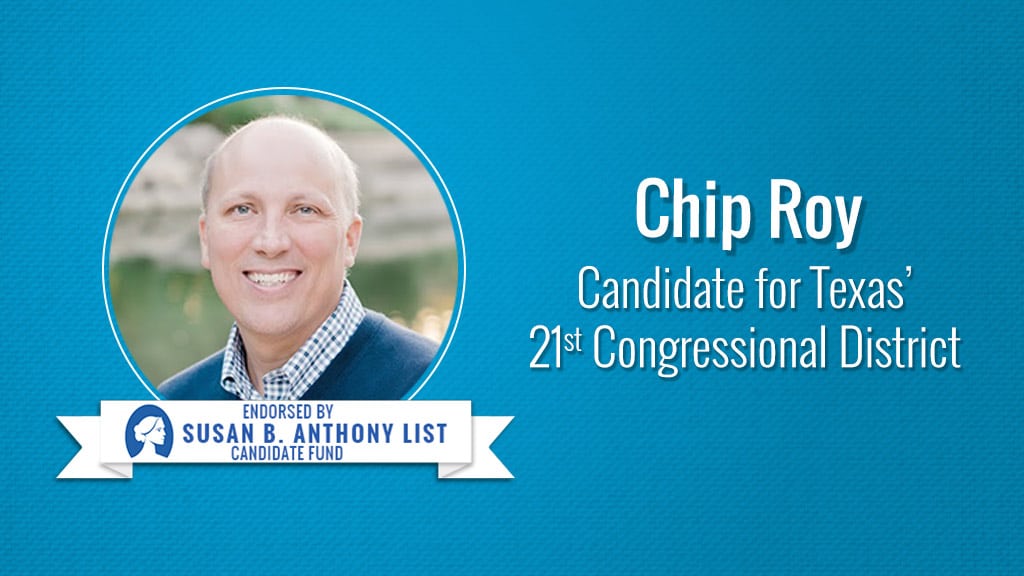 “Congressman Chip Roy has been an outspoken defender of the unborn throughout his career. We are proud to endorse him,” said the Honorable Marilyn Musgrave, SBA List’s vice president of government affairs. “As a father and a cancer survivor, appreciation of the sanctity of life is at the core of who Chip is. During his first term he has boldly called out the Pelosi Democrats for supporting abortion on demand through birth and even infanticide. We look forward to seeing him defeat extremist Wendy Davis, who became nationally infamous for blocking a bill to end late-term abortions more than halfway through pregnancy in Texas – legislation that passed with bipartisan support. Even she knows this agenda is deeply unpopular among Texans and the majority of Americans, as she has tried to obfuscate her record ever since. The contrast could not be starker. Congressman Roy will stand up for Texas’ values as he works to stop late-term abortion and defund the big abortion lobby of taxpayer dollars.”

Rep. Roy was first elected to Congress in 2018. His leadership on life throughout his first term is reflected in his “A” rating on our National Pro-Life Scorecard. He is a co-sponsor of the Support and Value Expectant (SAVE) Moms and Babies Act, the No Taxpayer Funding for Abortion and Abortion Insurance Full Disclosure Act, and the Pain-Capable Unborn Child Protection Act. He also offered a unanimous consent request for consideration of the Born-Alive Abortion Survivors Protection Act.

Roy has served as a federal prosecutor and a top advisor to Senators Ted Cruz and John Cornyn, Attorney General Ken Paxton, and former Governor Rick Perry. He has vast experience in banking and technology, working at NationsBanc Capital Markets, as well as in the oil and gas industry. He and his wife Carrah have two children and attend Hyde Park Baptist Church in Austin, Texas.