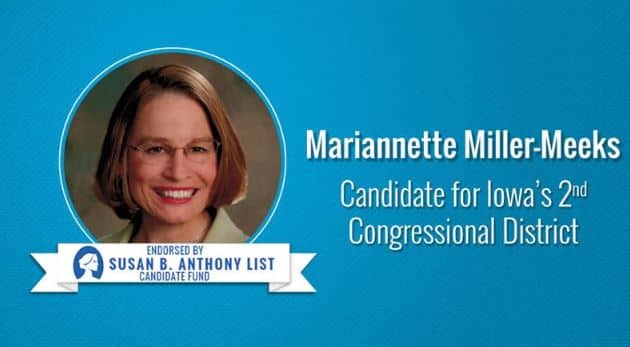 “With a 100 percent pro-life voting record during her time in the Iowa Senate, we can count on Mariannette Miller-Meeks to stand with unborn children and their mothers in Congress,” said the Honorable Marilyn Musgrave, SBA List Candidate Fund Vice President. “Mariannette has consistently backed pro-life initiatives, such as the effort to put a pro-life constitutional amendment directly on the ballot for Iowa voters, and legislation stopping taxpayer funding of abortion businesses like Planned Parenthood. Her record stands in stark contrast to Rita Hart, a pro-abortion extremist who is endorsed by groups that promote abortion on demand through birth. She will vote in lockstep with Pelosi’s pro-abortion agenda. We are pleased to endorse Mariannette and urge pro-life Iowans to support her.”

Mariannette Miller-Meeks was elected to the Iowa Senate in 2018. A veteran and a doctor, she served in the U.S. Army for 24 years, earning the rank of lieutenant colonel. She then established a medical practice in 1997 in Ottumwa, Iowa, where she and her husband Curt still live. They have two grown sons.