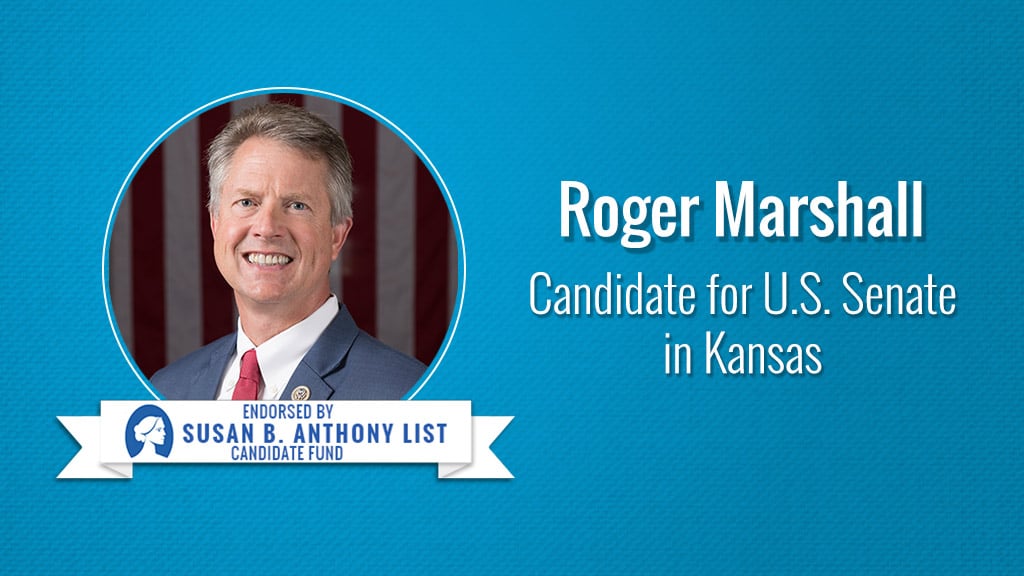 “Dr. Roger Marshall is an unwavering champion for unborn children,” said the Honorable Marilyn Musgrave, SBA List’s vice president of government affairs. “His 100% pro-life voting record in Congress stands in stark contrast to his opponent Barbara Bollier, who shamefully supports late-term abortion and is endorsed by the abortion industry. Unlike Bollier, who is radically out of step with constituents’ values, pro-life Kansans can count on Roger Marshall to make their voices heard. We are honored to support him and look forward to seeing him join the pro-life Senate majority in November.”

Dr. Marshall has represented Kansas’ 1st Congressional District since 2017, and his leadership on life throughout his tenure has earned him an “A” rating on our National Pro-life Scorecard. Marshall is a co-sponsor of the Support and Value Expectant (SAVE) Moms and Babies Act, the No Taxpayer Funding for Abortion and Abortion Insurance Full Disclosure Act, and the Pain-Capable Unborn Child Protection Act. Recently he introduced the Abortion Providers Loan Elimination Act to ensure that all abortion businesses, including Planned Parenthood, remain ineligible for forgivable loans issued by the Paycheck Protection Program and to hold them accountable for illegally applying for and accepting such funds.

Dr. Marshall previously served for seven years in the U.S. Army Reserves. He has 25 years’ experience as a practicing OB-GYN in Great Bend and served as chairman of the board of Great Bend Regional Hospital for 14 years. He and his wife Laina have four children and two grandchildren.