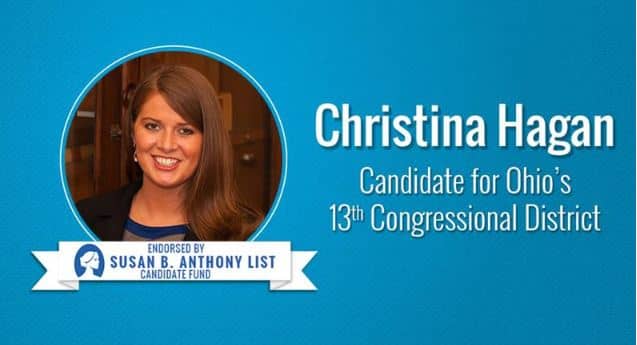 “Christina Hagan is the model of strong pro-life, pro-woman leadership Susan B. Anthony List exists to promote,” said the Honorable Marilyn Musgrave, SBA List’s Vice President of Government Affairs. “As a state legislator, Christina fought for some of the strongest pro-life protections in the nation as the lead sponsor of Ohio’s heartbeat bill. A proud mother of three, she gave birth to her twins on the 2018 campaign trail and is living proof that women need not be forced to choose between their dreams and their children. A member of our National Pro-Life Women’s Caucus, Christina understands the sacred dignity of each and every human life. Her opponent, incumbent Congressman Tim Ryan has betrayed his pro-life constituents, voting in lock step with Nancy Pelosi and the radical abortion lobby. Pro-life Ohioans need Christina’s strong leadership in Congress, and we are proud to endorse her.”

Christina Hagan served three terms in the Ohio House of Representatives and was a member of SBA List’s National Pro-Life Women’s Caucus, holding a 100 percent pro-life voting record. She was the lead sponsor of the Ohio heartbeat bill. She was also featured as the keynote speaker of the National Pro-life Conference last year. Christina and her husband have three children.