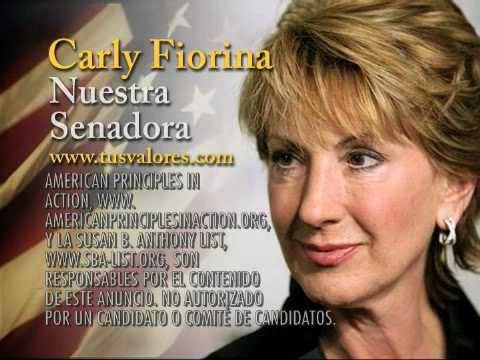 Dannenfelser: “California Latinos clearly place an emphasis on voting for candidates who represent their pro-life, pro-family values.  Fiorina is connecting with them on these core issues.”

WASHINGTON, D.C. – Today, the Susan B. Anthony List (SBA List) announced plans to spend another $125,000 this week to keep its “Nuestros Valores” Spanish-language television ad on the air in the Fresno, San Francisco and Los Angeles markets in the final week of the general election.  This latest push brings the total spent on the television ad between the SBA List, American Principles Project in Action (APPIA) and the National Organization for Marriage (NOM) to over $400,000.

“Latino voters know that Carly Fiorina is a fighter and that she will fight for their deeply held pro-life, pro-family values in the U.S. Senate,” said SBA List President Marjorie Dannenfelser, referencing recent polling showing that the majority of Latinos believe that abortion should be illegal.  “Latino voters could prove to be a deciding factor in this top priority race for the Susan B. Anthony List.”

Yesterday, a SurveyUSA poll showed encouraging numbers for Carly Fiorina among California Latino voters.  While recent Senate elections reveal an average 50-point spread between the Republican and Democrat candidates among California Latino voters, the SurveyUSA poll found Carly Fiorina’s gap closing in at just 19 points.  The numbers also represent a positive trend in the Latino community for Fiorina, who is doing 14 points better amongst Latino voters than California gubernatorial candidate Meg Whitman.  This uptick comes despite Whitman’s significant spending on advertising directed at Hispanics and the fact that Whitman opposes the Arizona immigration law while Fiorina favors it.

“These latest numbers provide strong evidence that our message is resonating,” Dannenfelser said.  “California Latinos clearly place an emphasis on voting for candidates who represent their pro-life, pro-family values.  Fiorina is connecting with them on these core issues.”

The Susan B. Anthony List has also spent over $50,000 in Spanish-language Google ads directing online users to the TusValores.com website.  Additionally, SBA List members have bundled $80,000 in direct campaign contributions for Carly Fiorina.

The Susan B. Anthony List plans to spend $6 million on voter education in the midterm elections, including $3 million on key House and Senate races. The Susan B. Anthony List is a nationwide network of over 280,000 Americans, residing in all 50 states, dedicated to mobilizing, advancing, and representing pro-life women in politics.  Its connected Candidate Fund increases the percentage of pro-life women in the political process.