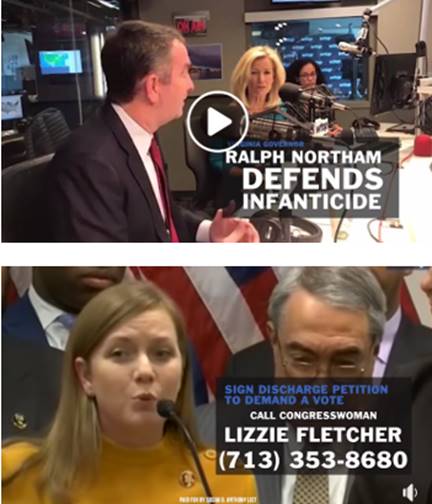 “Many Democrats who represent Republican-leaning districts have not yet signed the discharge petition to hold a vote on the Born-Alive Abortion Survivors Protection Act,” said SBA List President Marjorie Dannenfelser. “This bill is urgently needed as lawmakers in New York, Virginia, and other states push a radical agenda of abortion on demand through the moment of birth and even infanticide. The overwhelming majority of Americans – including 70 percent of Democrats – want Congress to protect vulnerable babies who survive abortions, yet Speaker Pelosi and House Democratic Party leaders have repeatedly blocked this compassionate, common-ground bill. We urge Democrats to listen to their constituents and stand up to the extremists in their party to protect innocent children.”

Nearly 200 members of Congress have signed a discharge petition filed by House Republican Whip Steve Scalise (R-LA) to hold a vote on the Born-Alive Abortion Survivors Protection Act. House Democratic Party leaders have refused more than 30 requests by members to vote on the bill. If a majority of representatives sign the petition, it will force a vote by the full House.

Nationwide polling released by SBA List finds that 77 percent of voters support legislation to ensure that a baby who survives a failed abortion be given the same medical treatment as any other baby born prematurely at the same age (55 percent strongly support.)

In his State of the Union address, President Donald Trump called out the Democratic Party for their support of late-term abortion and even infanticide, following efforts in New York and Virginia to legalize abortion on demand through birth.