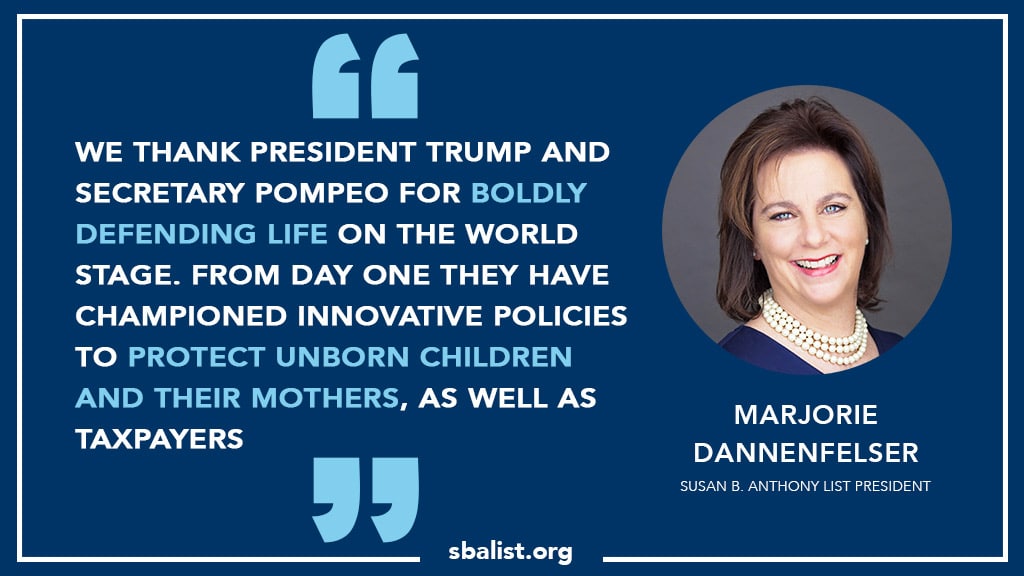 Washington, D.C. – Today the Trump administration proposed an expansion of President Donald Trump’s Global Protect Life Rule. The new rule would require that foreign organizations receiving global health aid through contracts from the U.S. government agree to not provide or promote abortions, even with funding from other sources.

“We thank President Trump and Secretary Pompeo for boldly defending life on the world stage. From day one they have championed innovative policies to protect unborn children and their mothers, as well as taxpayers,” said SBA List President Marjorie Dannenfelser, who serves as national co-chair of Pro-Life Voices for Trump alongside Christina Bennett. “A recent State Department report proves definitively that the Trump administration’s pro-life policies are working. While a small handful of radical pro-abortion groups such as International Planned Parenthood Federation and Marie Stopes International refuse to comply and have forfeited their eligibility for funding, the overwhelming majority of grantees will continue providing much-needed health aid without sacrificing the dignity of unborn human life. This new proposed rule builds on that success, further preventing the big abortion industry from exporting abortion on demand around the world on American taxpayers’ dime.”

In August the U.S. State Department released a report on the implementation of the Global Protect Life Rule. The report found that only eight out of 1,340 prime awardees refused to comply with the policy, while efforts were made to avoid gaps in care through new partnerships.

Marist polling in January 2020 found that 76% of Americans oppose using taxpayer dollars to fund abortion abroad, including 61% of people who self-identify as pro-choice.