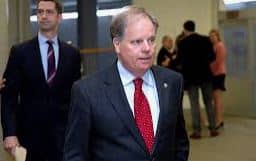 Jones Joins Company of Abortion Extremist Kamala Harris, Among Others

Washington, D.C.  – The national pro-life group Susan B. Anthony List (SBA List) today launched the updated Susan B. Anthony List National Pro-Life Scorecard, a tool to inform voters ahead of election day exactly where their elected officials stand on life with a simple letter grade, backed up with voting and leadership history. Alabama Senator Doug Jones has been demoted to an F grade on the Pro-Life Scorecard for failure to vote earlier this year in support of protecting unborn babies from painful late-term abortions.

Jones is now in the company of every other Democratic Senator running for re-election – all have F grades.

“Our Scorecard shows that pro-abortion Democrats led by Kamala Harris have voted in lockstep in favor of late-term abortion, taxpayer-funded abortion, and even infanticide,” said SBA List President Marjorie Dannenfelser. “Senator Doug Jones is no better – when asked earlier this year about his stance on late-term abortions performed after the point at which science has proven unborn children feel pain, Senator Jones laughed and called the issue ‘stupid.’ He must be held accountable for his abortion extremism.”

Learn more about the abortion extremism of the Biden-Harris ticket at www.LifeOnTheBallot.com.